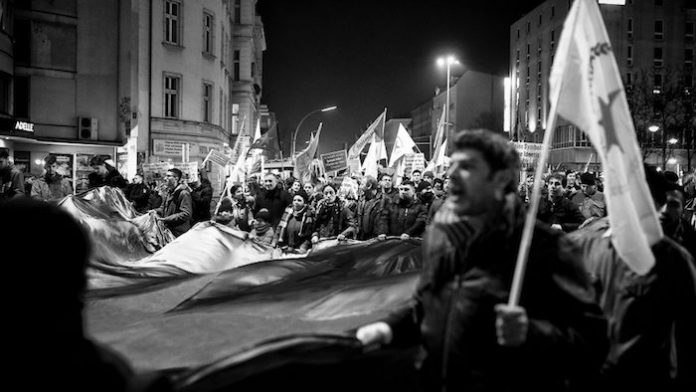 The Turkish Armed Forces and the Free Syrian Army (FSA) have entered Syria’s Afrin district in order to fight the People’s Protection Units (YPG). Having encircled the town centre, the Turkish Army and the FSA now control more than three fourths of Afrin.  Turkey’s intervention came after the U.S. declaration that it would form a border force from the Kurdish-led groups in the northern part of Syria.  Even though it poses some political and military risks for all parties in Syria, Operation Olive Branch (Zeytin Dalı Harekâtı) seems to have crucial effects for Turkey’s security and national sovereignty.

There are more than 750.000 civilians living in Afrin. It is also claimed that approximately 200.000 of them are in need of humanitarian aid. Some argue Turkey’s operation in Syria’s north is against international law since it can be considered a violation of Syria’s sovereignty.  People who oppose Operation Olive Branch also say that Turkey’s air strikes harm civilians. However, Turkey argues that it has taken all necessary measures and has collected data and intelligence about the targets so that civilians may not be hurt.  Indeed, the Turkish effort to take over the entirety of Afrin could have proceeded very quickly, but Turkish Army officers say the battle moved slowly because Turkish soldiers followed warnings and precautions to avoid damage to civilians.  Referring to the right of self-defense under international law and Article 51 of the United Nations Charter, Ankara asserts that more than 700 attacks against Turkey have been carried out from the Syrian territory, and they have every right to clear their borders of the YPG militants.  According to the Turkish General Staff, Operation Olive Branch aims to establish security and stability along the Turkey-Syria border as well as to protect the Syrian people from the cruelty of terrorists. Considering the operations that it has launched, it can be said that the YPG / PKK has not been the only concern for Turkey.  During the Operation Euphrates Shield (2016-17), the Turkish Army and the FSA killed thousands of DAESH (Isis/Isil) militants and cleared the areas including Jarablus and Al-bab from the terrorists.  However, as DAESH (Isis/Isil) lost its influence, the YPG has become considered a more dangerous armed group for Turkey.

The YPG is claimed to be linked to the Kurdistan Workers’ Party (PKK), which is an internationally recognised terrorist organisation. The U.S.’s support of the YPG poses a long term threat for Turkey’s security because of the PKK/YPG’s political ambitions. With its Marxist-Leninist background, the PKK calls for an independent Kurdish state in Turkey, Syria, Iraq and Iran. However, the PKK problem can be considered a transnational one that also affects Europe and other regions in the world.  When the PKK supporters organised a meeting in Düsseldorf, Germany to protest Turkey’s operation in Afrin, they clashed with the German police and twelve police officers were injured as a result.  In addition, Philipp J. Meckert was quoted as saying that PKK supporter protests in Cologne, Germany led to €1.2 million loss in Schildergrasse, one of the busiests streets in Cologne.  It should be noted that the PKK is also famous for its competence with  drug trafficking since the organisation is claimed to control eighty percent of illegal narcotics market in Europe.

As Russia, Iran and the Assad regime are increasing their influence in Syria, the U.S. has only the YPG to balance power in the area.  However, Turkey’s consideration is much more related to security concerns.  If the YPG militants find a way to establish autonomy in the Northern Syria, it would be easier for them to provide economic and military assistance to the PKK, which has killed around 40,000 people in Turkey.  If Turkey is able to establish a safe zone near its borders and increase its influence in Syria, Turkey may guarantee its security as well as its place at the table of the Syrian peace talks.