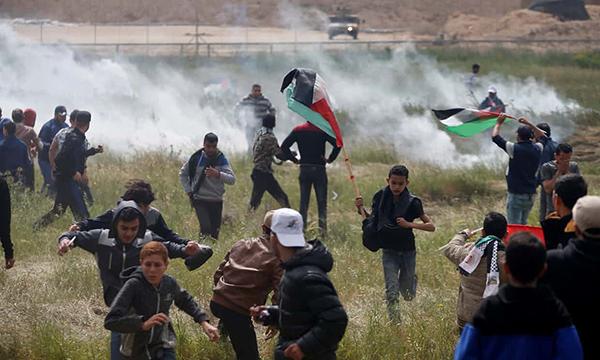 Hazem Balousha in Gaza City and Oliver Holmes in Jerusalem

At least 15 Palestinians have been killed and hundreds wounded by Israeli forces in Gaza, Palestinian medics have said, as protesters kicked off a planned six-week demonstration demanding the right of return for refugees.

Israel’s military said 17,000 Palestinians were “rioting” in six locations in the Gaza strip on Friday, rolling burning tires at the security fence and its troops, which it said responded “with riot dispersal means and firing towards main instigators”.

Israeli forces enforce a no-go zone for Palestinians on land in Gaza close to the fence and regularly fire on young Palestinian men who hurl stones and firebombs.

But organisers said the “Great March of Return” demonstration intended to be peaceful, and would comprise of families of men, women, and children camping. Cultural events, including traditional dabke dancing, are planned.

While protest camps within Gaza were set up a few hundred metres back from the heavily fortified barrier, large crowds marched on Friday towards the fence and started throwing rocks. Ten men with bullet wounds were seen being carried away on stretchers. All had been shot in the legs. The Palestinian health ministry in Gaza said 15 people had been killed in the clashes.

Israel dismissed the entire demonstration as a Hamas ploy. Its military had deployed reinforcements around Gaza, including more than 100 special forces sharpshooters and paramilitary border police units.

“We are identifying attempts to carry out terror attacks under the camouflage of riots,” Maj Gen Eyal Zamir, commander of the Israeli military’s Southern Command, which includes the border, said on Friday.

The Palestinian health ministry said at least 500 Palestinians have been hurt by live fire, rubber-coated steel pellets or teargas fired by Israeli forces along the fence.

The protests coincided with the start of the Jewish Passover, when Israel security forces are normally on high alert.

Hours before demonstrations even started on Friday, the first fatality occurred. A Palestinian farmer was killed and a second Palestinian was wounded by an Israeli tank shell, according to Gaza’s health ministry.

Witnesses said the man was working on his land, but an Israeli army spokesman said the two suspects were “operating suspiciously”. Gaza’s health ministry later said three men were shot dead during clashes.

Ahead of the protest, Israel has made clear it was considering force to prevent what is feared might be a “deliberate charge on its borders”.

The Israeli foreign ministry pre-emptively placed the blame for any clashes on “Hamas and the other Palestinian organisations who have manufactured this entire campaign”.

Friday marks Land Day, a commemoration of the killing of six unarmed Arab protesters in Israel in 1976, who were demonstrating land confiscations in northern Israel.

At one of the protest camps near Gaza City, a few dozen tents had been erected and residents were walking around, some carrying the Palestinian flag.

Fatima Nasser, 65, said she had come with her seven children, all of whom were unemployed. “To die with dignity is better than living a life full of humiliation. We will return to our land, we will return to our homeland,” she said. “Israel kills us anyway, whether it’s by shooting or blockade.”

Eighteen-year-old Mahmoud Younis said he had come to show the world that Gazans “deserve to live”. “No one looks at us, no one thinks about us, we will continue to camp here and come daily until someone looks at us and there is a solution to this difficult and miserable reality.”

Gaza’s rulers Hamas back the sit-in, which is expected to last until 15 May. On that date, Palestinians commemorate the Nakba, or “catastrophe”, when hundreds of thousands fled their land or were expelled from their villages during the war around the time of the creation of Israel in 1948.

The majority of Gaza’s two million residents are refugees from the mass displacement or their descendants, according to the United Nations.

On 14 May, Israel will mark its 70th anniversary and a controversial new US embassy is set to be opened in Jerusalem after US president Donald Trump broke with international consensus to recognise the holy city as Israel’s capital.

The move infuriated Palestinians, who claim the annexed eastern sector of the city as the capital of their future state. It also led the Palestinian leadership to reject the US as a mediator for peace.

What will US recognition of Jerusalem mean for the peace process?

Trump’s Middle East envoy, Jason Greenblatt, said ahead of Friday’s protest that Hamas was “encouraging a hostile march on the Israel-Gaza border”.

Saeb Erekat, a senior Palestinian negotiator, said: “Israel’s official incitement against the rights and lives of the Palestinian people has little to do with Israel’s security and a lot to do with perpetuating control over our lives by attacking every non-violent action.”

Desperation among Gazans also deepened after Washington cut funding to the UN agency responsible for Palestinian refugees, sparking fears that schools and healthcare provided by UNRWA would exacerbate an already dire humanitarian situation.

The coastal enclave has suffered from a crippling blockade imposed by Israel and Egypt. An already-disastrous humanitarian situation worsened after the West Bank-based Palestinian Authority refused to pay for Gaza’s electricity, in part to press it’s political rival Hamas to loosen control of the area.