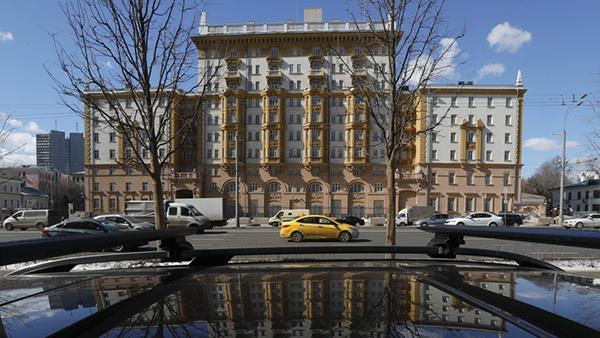 In a tit-for-tat move, Moscow expelled 60 U.S. diplomats and ordered the consulate in St. Petersburg closed.

Russia ordered 60 U.S. diplomats to leave the country by April 5, and said the American consulate in St. Petersburg must close by March 31. This action—the expulsion of 60 diplomats and the closing of a consulate—is a precise parallel to a move announced this week by the Trump administration, which was responding to Moscow’s alleged role in the attempted assassination by nerve agent of Sergei Skripal, a former Russian spy, and his daughter, Yulia, in the U.K.

The U.S. action was coordinated with its allies, who also expelled a varying number of Russians. The U.K. says Russia was likely behind the attack on the Skripals because the nerve agent employed against them was Russian in origin. Russia denies any such action and has called for an independent international investigation into the allegation. The U.S. and its allies say the U.K.’s word is good enough for them.

The U.K. began the actions first, expelling 23 diplomats on March 14 in retaliation for the attack on Skripal and his daughter. In response, Moscow expelled 23 U.K. diplomats. Then on Monday came the coordinated Western action. The U.S. expelled 60 Russians, including 12 who served at the UN, labeling them all spies. It also shut the Russian consulate in Seattle. Other Western nations followed. In all, 28 countries expelled 153 Russians.

On Thursday, Sergei Lavrov, the Russian foreign minister, said that Jon Huntsman, the U.S. ambassador to Russia, had been summoned to the Foreign Ministry and informed of the expulsions. Russian media reported that 58 U.S. diplomats would be expelled from the embassy in Moscow, while two would be expelled from the consulate in Yekaterinburg. St. Petersburg, where the U.S. consulate is being closed, was the site of the original U.S. mission to Russia in 1780, and has symbolic value for U.S.-Russian relations. Russia also said it would expel an equal number of diplomats from the countries that acted against its officials.

“We invite the U.S. government, which is encouraging and fanning the campaign of slander against our country, to rethink and stop these reckless actions destroying our bilateral relations,” a Russian Foreign Ministry statement said Thursday.

Russia’s relations with the West have been worsening at least since its annexation in 2014 of Ukraine’s Crimean peninsula. Although the expulsions may have reached their logical conclusions with Thursday’s announcement, the tensions that prompted them are only likely to rise. Russia and the West are united when it comes to fighting terrorism, but they are on the opposite side of some of the world’s most intractable conflicts.

Russia’s increasingly muscular foreign policy in countries of the former Soviet Union and Eastern Europe—countries Moscow regards as part of its sphere of influence—worry those nations, the EU, and NATO. And Russia’s role in the Syrian civil war decidedly shifted the balance of that conflict toward Bashar al-Assad, Moscow’s client. Moscow has also re-emerged as a major player in Afghanistan, as well as in North Korea, and in talks over the Iranian nuclear agreement. Any progress on any of those issues will need Russia’s buy-in.

Russia had hoped for closer relations with the United States after the election of President Trump, but that has not happened despite cooperation on some issues such as the fight against ISIS. Moscow’s announcement Thursday is an indication that Russia will not sit idly by as the West punishes it for its actions—whether those punishments are justified or not. The Yeltsin years of chaos have been replaced by Putin’s re-energized Russia that has returned to many of its Cold War-era policies—as well as practices.

Still, retaliatory expulsions—until relatively recently viewed as a vestige of the Cold War—have become common, even if, as my colleague Yasmeen Serhan notes, their impact is limited. Such expulsions have only increased as relations between Russia and the West deteriorate.

Last August, the U.S. closed the Russian consulate in San Francisco as retaliation for Moscow’s decision the previous month to seize two U.S. diplomatic properties in Russia and order the U.S. to reduce its diplomatic staff in the country by 755 people (mostly Russian employees). That move by Moscow was itself in response to the Obama administration’s decision in December 2016 to expel 30 Russian diplomats from the U.S. and seize Russian diplomatic compounds in New York and Maryland—a move that came in response to Moscow’s interference in the U.S. presidential election.

Which brings us to the latest round of diplomatic expulsions. Reacting this week to the actions by the Western nations, Lavrov said: “We know for certain that this is the result of colossal pressure and colossal blackmail that, regrettably, is Washington’s main instrument in the international arena today.”

“It is clear,” the statement said, “… that the Russian federation is not interested in a dialogue about issues that matter to our two countries.”