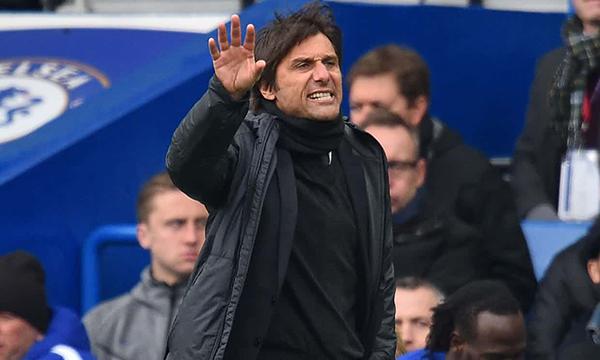 Antonio Conte has insisted he has no concerns over his immediate future at Chelsea and will continue to “give everything” to the club this season despite his team’s hopes of qualifying for next season’s Champions League having suffered a potentially critical blow with defeat against Tottenham Hotspur. Spurs came from behind to secure their first win at Stamford Bridge since February 1990 courtesy of a fine strike from Christian Eriksen and a second-half brace from Dele Alli. The result hoisted the visitors eight points clear of fifth‑placed Chelsea, whose pursuit of the FA Cup would hardly constitute a consolation after a dispiriting campaign.

Conte is expected to depart in the summer but was asked if he feared for his immediate future at a club who have traditionally acted once hopes of a top-four finish appear under threat. “I’m not worried,” said the Italian, who has made his frustrations clear at an apparent reluctance to build on last season’s title success. “I’m giving – the players are giving – everything. We are working very hard to try to have a good season but, in the end, we are deserving this season. It means our value is this.

“I have my opinion but I’m very tired of always repeating the same things. I don’t want to create problems. If we are in this position, we deserve to be in this position. You have to ask the club, not me [about the significance of finishing in the top four]. I repeat: my task is to work and I know I work 24 hours a day for Chelsea, me and my staff. The commitment of the players is top. Despite this we stay in this position. We must be a bit worried about this.”

Spurs, in contrast, have given themselves breathing space in the top four after only a second away win in 20 games against the current top six. “To create a winning mentality you have to get good results in big stadiums like the Bernabéu or Stamford Bridge,” said Mauricio Pochettino. “Four years ago when we signed [at Spurs] the idea was to reduce the distance to the top four. That was the first target and we’ve done that.

“It’s a difficult thing to move forward. We have to talk a lot in the club, with [the chairman] Daniel Levy, and get round a table and see what happens. After four years together, the club has moved on in everything: not just in football but in terms of the facilities, too. Next season we’ll have a new stadium and it could be fantastic. I’ll share my ideas with the club and see how we can improve.”