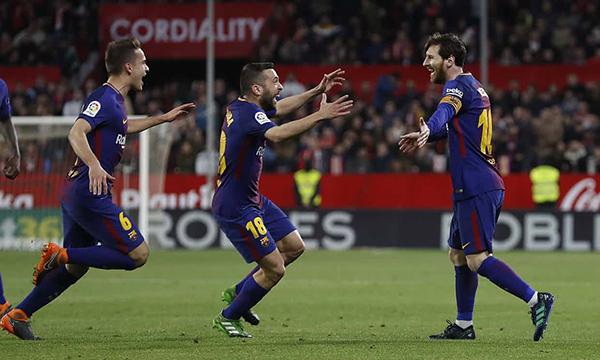 Lionel Messi came off the bench to preserve Barcelona’s unbeaten run in La Liga with a sensational late equaliser in a 2-2 draw at Sevilla as the runaway leaders came back from two goals down in the space of a minute.

Real Madrid eased to a 3-0 win over Las Palmas with two goals from Gareth Bale and one from Karim Benzema, despite missing six regular starters including Cristiano Ronaldo and their captain, Sergio Ramos.

Franco Vázquez opened the scoring for Sevilla from close range in the 36th minute and the Colombia international Luis Muriel doubled the home side’s lead by smashing in on the rebound five minutes into the second half.

Messi had began the game on the bench due to continued muscle discomfort which caused him to miss Argentina’s friendlies against Italy and Spain; the league’s top scorer was called into action in the 58th minute, replacing Ousmane Dembélé.

Barça were instantly lifted by the Argentine’s arrival and Luis Suárez rattled the near post but Sevilla continued to pour forward and Vázquez and Muriel missed clear chances to put the game to bed.

They paid dearly for their wastefulness as Suárez pulled one back for Barça with an acrobatic finish in the 88th minute following a corner and Messi whipped in the equaliser in the 89th with a venomous left-foot strike.

The goal stretched the Catalans’ unbeaten league run to 37 games; if they avoid defeat next week at home to Leganés they will equal Real Sociedad’s Liga record of 38 games without defeat, which has stood since 1980.

Barcelona top the standings on 76 points but if second-placed Atlético Madrid beat Deportivo La Coruña on Sunday their advantage at the top will be cut to nine.

In the Canary Islands, Bale exhibited his phenomenal pace and power to race on to an exquisite through-ball from his old Tottenham team-mate Luka Modric and fire in the opening goal in the 26th minute and Benzema doubled Real’s advantage from the penalty spot after Lucas Vázquez was fouled.

Bale won and converted another spot-kick six minutes into the second half to put Madrid further at ease against Paco Jémez’s struggling side, who are 18th in the standings and seven points adrift of safety.

The Real defender Nacho Fernández had to be substituted in the first half with a thigh strain and the Spaniard was seen crying as he sat on the sidelines because the injury is likely to rule him out of Tuesday’s Champions League quarter-final first leg at Juventus.

Zinedine Zidane left Ronaldo, Marcelo and Toni Kroos at home for the trip to the Canary Islands and was without Isco and Ramos due to injury, and Dani Carvajal through suspension, meaning his squad will be well rested for the trip to Turin for a rerun of last year’s Champions League final.