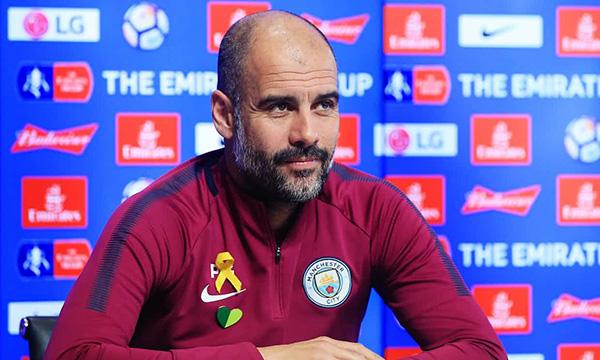 “They are far too good for anyone,” said Sam Allardyce. “Almost unstoppable,” stated Pep Guardiola. The temptation is to assume each was discussing Manchester City after another elegant evisceration, a demonstration of how to ally class with a clinical streak, possession football with penetration.

And, indeed, the beaten Everton manager was bemoaning the excellence of his conquerors. “In my long career I have found a way to frustrate a team and block them off. But with this team, whichever way you try to block them off they can get round it and through it,” the arch-nullifier Allardyce said.

Yet Guardiola was already casting his thoughts forward to his next visit to Merseyside. His gaze had been diverted from his own side towards their next opponents. The prospect of clinching the title against Manchester United on Saturday was not enough to hold his attention.

“Like a manager, now Liverpool will occupy all my head,” he said. Was he, Guardiola was asked, making special provisions to stop the 37-goal Mohamed Salah? “Not just him, [Sadio] Mané and [Roberto] Firmino. All three, they are almost unstoppable,” replied Guardiola. “They are fantastic players. The way Liverpool play is so complicated for us. We know that. They are so quick, they are so good and it is tough.”

The sense was that the planning for the Champions League quarter-final trip to Anfield on Wednesday had already begun. The sight of the world’s second most expensive centre-back at left-back hinted at a bespoke ploy to stop Salah.

Another of Merseyside’s jet‑heeled right‑wingers, Theo Walcott, provided Aymeric Laporte with a dress rehearsal. Guardiola cited the Frenchman’s minor foot injury as the only cause for concern.

“It is not easy to defend against Walcott, so he did really well,” the City manager said. That may have been a flattering appraisal: Laporte is not as quick as Walcott but then few are, and resorted to a blatant block once when outpaced. The £57m addition was otherwise largely unchallenged as, with Walcott limited to 19 touches and Everton to a meagre 18% of possession, it felt an inconclusive audition.

Yet it hinted at a game plan, with Laporte’s narrow station closing the channel between centre-back and full-back where Salah tends to raid. Nicolás Otamendi was for once positioned to Vincent Kompany’s right – presumably preparing to get him away from his Egyptian tormentor – and Guardiola’s lopsided shape doubled up as a flexible formation.

Part right-back, part wing-back, Kyle Walker completed a defensive quartet when required but surged forward when his side had the ball. The intellectual in Guardiola has long been intrigued by how Jürgen Klopp uses congesting the centre of the pitch as a devastating attacking weapon and, just as only Liverpool’s full-backs offer them any real width, Walker and Leroy Sané were in effect one-man flanks at Goodison Park. Guardiola’s prolific right-winger, Raheem Sterling, played further infield than usual.

If his Anfield counterpart Salah has been the scourge of left‑backs, Guardiola has none: not fit specialists anyhow. Laporte is the fourth makeshift, a centre‑back joining a central midfielder (Fabian Delph), a winger (Oleksandr Zinchenko) and a right‑back (Danilo) as Guardiola’s resourcefulness and his players’ adaptability have ensured what should – after Benjamin Mendy’s knee injury in September – have become a problem position has rarely presented problems except against Liverpool.

In September, even with Mendy available and raiding forward from wing‑back, Salah tormented the left of three centre-backs, Otamendi, before Klopp sacrificed him after Mané’s red card. Few men can have performed as abjectly in a 5-0 win as the Argentinian. Delph went off injured in January’s rematch. Danilo was on the pitch for Liverpool’s nine-minute three-goal salvo that sealed City’s sole league defeat.

Scars may remain. Guardiola name-checked Liverpool’s four scorers that day with an unprompted mention of the midfielder who broke the deadlock. That Kevin de Bruyne played deeper than usual on Saturday suggested he may be granted a similar role alongside Fernandinho to try and halt Alex Oxlade-Chamberlain on Wednesday. “We cannot deny [the excellence of the] three people running up front, plus [Oxlade-] Chamberlain in the middle, plus set pieces with Virgil van Dijk,” said Guardiola. “They are an extraordinary team.”