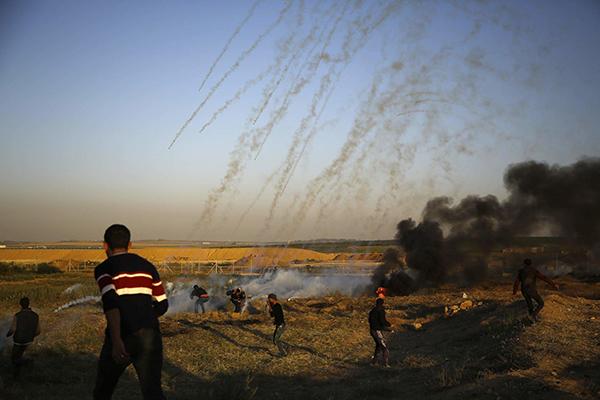 By The Editorial Board

The editorial board represents the opinions of the board, its editor and the publisher. It is separate from the newsroom and the op-ed section.

Palestinians in Gaza are among the world’s most desperate people. For more than a decade, their 140-square-mile strip has been blockaded by Israel and Egypt, sharply restricting the flow of goods and people. Indeed, many Gazans have never left the enclave, a grim measure of their prolonged isolation.

Unemployment is more than 40 percent for the general population and nearly 60 percent for Palestinian youths. Last month, the United Nations warned of an imminent humanitarian disaster if global donors did not contribute $539 million for fuel for critical water, sanitation and health facilities, most for Gaza and its two million people. The remainder of the money would go to Palestinians in the West Bank and East Jerusalem.

Under such conditions, it is no wonder that pent-up frustrations would erupt in protests, as they did last Friday. Responding to the demonstrations, Israeli forces killed 17 Palestinians at the border fence that separates Israel from Gaza. More than 1,000 Palestinians were injured. It was the worst violence since the Gaza war of 2014.

Israel has a right to defend itself and maintain civil order, but it also has an obligation to respect peaceful protests and not use live ammunition on unarmed demonstrators. Israel’s response appears to have been excessive, as human rights groups have asserted.

Amnesty International called on Israel to immediately end its “heavy handed, and often lethal, suppression of Palestinian demonstrations.” Peace Now said that the casualties are “an intolerable result of a trigger-happy policy.” Shlomo Brom, a retired brigadier general at Israel’s Institute for National Security Studies, told The Times that while the military probably decided to use lethal force as a deterrent, “In my opinion they should have planned from the beginning to use minimal force and to prevent casualties.”

Israel said it acted judiciously to prevent a dangerous breach of its borders and sovereignty led by Hamas, the Islamic militant group that controls Gaza, and to protect nearby communities. No one actually crossed the fence on Friday.

An independent and transparent investigation is an obvious way to get at the truth. But with President Trump backing Prime Minister Benjamin Netanyahu of Israel, the United States on Saturday blocked a move in the United Nations Security Council calling for such an inquiry. The European Union has also urged an independent investigation.

Friday’s protests, which drew tens of thousands of Palestinians to the Gaza boundary, were the start of a six-week campaign called the Great Return March. The organizers said it was intended as a peaceful sit-in to raise awareness of the blockade of Gaza and to support Palestinians’ demand to return to homes lost in 1948 in what is now Israel. More than two-thirds of Gazans are refugees from villages that have since been destroyed and their descendants.

Such goals seem farther away than ever. Neither Mr. Netanyahu nor Mr. Trump has shown serious interest in a two-state solution that would give Palestinians their own country and resolve central questions about land, refugees, borders and security, even though Mr. Trump says a peace deal is a priority. Under Mr. Netanyahu, Israel has expanded its claims to land that Palestinians seek for their own state.

Instead of easing tensions and resolving the political questions at the heart of the Israeli-Palestinian conflict, Mr. Trump has exacerbated the situation, most recently by unilaterally recognizing Jerusalem as the capital of Israel, in exchange for nothing, and declaring his intention to move the American embassy there from Tel Aviv. For decades, the international community, including the United States, has said Jerusalem’s fate should be decided in Israeli-Palestinians negotiations.

Palestinian leaders have also failed their people. Hamas leaders who run Gaza have waged war against Israel, exploiting their people in the process. Their rival, the Palestinian Authority, has been feckless at pursuing peace with Israel and last year imposed its own punitive measures on Gaza, including cutting salaries, in a bid to end Hamas’s control.

On May 15, Palestinians in Gaza plan to observe the 70th anniversary of what they call the “nakba,” or “catastrophe,” when 750,000 Palestinians fled or were driven from their homes in what is now Israel, by breaking through the border fence and marching toward their former villages. The demonstration will come the day after Israel celebrates the 70th anniversary of its independence and the United States formally opens its embassy in Jerusalem.

Unless someone steps up to end Gaza’s humanitarian disaster, ensure Israel and the Palestinians act with restraint during the protests and set a credible peace process in motion, both sides could face a new catastrophe.