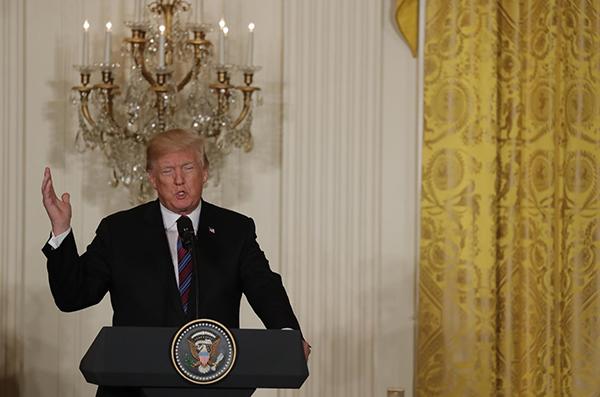 WASHINGTON (Reuters) – President Donald Trump said on Tuesday he will make a decision about pulling troops out of war-battered Syria very soon, expressing remorse about the U.S. role in violent conflicts going back to the country’s invasion of Afghanistan and Iraq nearly two decades ago.

“Our primary mission in terms of that was getting rid of ISIS. We’ve almost completed that task and we’ll be making a decision very quickly, in coordination with others, as to what we’ll do,” Trump said during a press conference alongside the heads of three Baltic states, using a common acronym for the extremist Islamic State group. “I want to get out. I want to bring our troops home.”

The special U.S. envoy for the global coalition against Islamic State, Brett McGurk, offered a slightly different assessment at Washington forum earlier on Tuesday, saying : “We are in Syria to fight ISIS. That is our mission and our mission isn’t over and we are going to complete that mission.”

As of three months ago, the United States had spent $7 trillion on the Middle East over the past 17 years, Trump told the press conference. The Sept. 11, 2001, attacks on the World Trade Center and Pentagon spurred the country to try to defeat violent and threatening groups in the Middle East and Asia.

“We get nothing, nothing out of it,” Trump said. “Think of it – $7 trillion over a 17-year period. We have nothing – nothing except death and destruction. It’s a horrible thing. So it’s time.”