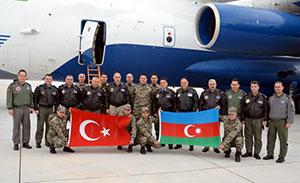 The war demonstrated to the whole world the overwhelming military superiority of Azerbaijan over Armenia. Armenia’s losses exceeded 200 people killed and more than 500 wounded; Azerbaijan lost 31.

The April War once again clearly proved that Azerbaijan has not reconciled and will never reconcile itself to the loss of its occupied territories, and that Baku does not accept the official status quo around Nagorno-Karabakh.

During four April days in 2016, Armenia launched the same aggressive actions and barbarities against Azerbaijan as it had for almost four years in the early 1990s, when it seized Azerbaijani territories by force – Nagorno-Karabakh and seven surrounding regions. From second to fifth of April 2016, the Armenian armed forces fought actively, firing upon the positions and populated parts of Azerbaijan, especially along the entire border line, with rockets and artillery, armored vehicles and aircraft. As a result of the counteroffensive, Azerbaijan managed to disrupt the enemy’s plans and free some of its lands.

Unlike in the 1990s, 2016 was a most unfortunate year for Armenia, and I am sure this event will be remembered for a long time as the great failure in the foreign policy of Armenian President Serzh Sargsyan.

Why? Because immediately after the defeat in the April War, President Sargsyan fired several high-ranking Defense Ministry generals. The dismissal of three generals immediately testifies to blunt mistakes made during the military operation against Azerbaijan that it was impossible for the president not to react to.

So why did Armenia lose the April War? First of all, the military intervention in Azerbaijan was disrupted due to the fact that in recent years the material and technical base of the Azerbaijani armed forces has improved significantly – modern weapons have been added to the arsenal of the army, which has been filled up with modernized and modern military equipment. In addition, frequent military exercises have significantly increased the readiness of Azerbaijani military personnel. All this, of course, is the result of the well thought-out and far-sighted foreign policy of Azerbaijani President Ilham Aliyev.

Second, Azerbaijan today closely cooperates with Israel. Official Baku buys from Israel drones and armored vehicles, electronic reconnaissance equipment, anti-tank missiles, anti-aircraft weapons and many other modern weapons. Some of these weapons were successfully used in battle. For example, with the help of kamikaze drones, a bus full of Armenian volunteers, an “Akatsiya” self-propelled artillery gun, personnel of one of the rear units of the Armenian army and a shock group of the Armenian infantry was destroyed. At the same time, Armenian electronic warfare and anti-aircraft defense could not oppose these blows.

Additionally, Azerbaijan employed the Israeli Spike LR anti-tank missile. With the help of these weapons, it was possible to destroy dozens of enemy units. Even the Armenians have acknowledged the loss of 14 tanks (the real figure is probably much larger), four infantry fighting vehicles, several cannons and anti-aircraft guns. Armenian soldiers could not give an adequate response to this Israeli weapon.

By the way, over the years of their cooperation Israel and Azerbaijan have concluded contracts in the military-industrial sphere for almost $5 billion, most of which have already been completed, as President Aliyev noted earlier. According to the recently published report of the Stockholm International Peace Research Institute (SIPRI), Azerbaijan is in the top three buyers of Israeli weapons, military equipment and military technology. According to SIPRI, Azerbaijan bought arms from Israel for $137 million.

This is an indicator of the politic and wise policy of the country’s leadership, which correctly chose in favor of military cooperation with Israel. After all, Israeli weapons and military technology are among the best in the world, distinguished by reliability, high quality and technological excellence. Also, the access to advanced military technologies of Israel allowed the defense industry of Azerbaijan to establish its own production of weapons samples in the shortest possible time.

Summarizing the above, I want to note that the war in April 2016 demonstrated to the whole world the overwhelming military superiority of Azerbaijan over Armenia. During the “four-day war” Armenia’s losses exceeded 200 people killed and more than 500 wounded; Azerbaijan lost 31 soldiers.

Azerbaijan bows its head before the memory of the heroes who fell countering the attack of Armenia on the indigenous territories of Azerbaijan, and at the cost of their lives prevented mass atrocities against the Azerbaijani people. The bright and eternal memory of them will always live in our hearts.

The author is the director of the international expert club Eurasia-Azerbaijan, and editor-in-chief of the Azerbaijani news agency Vzglyad.az.