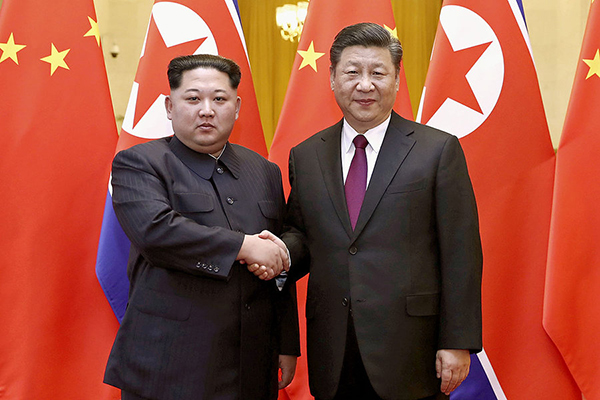 Many policy experts support President Trump’s aims on North Korea and Iran. But the weakening of behind-the-scenes legwork to achieve them may generate counteractions and unintended consequences. A biweekly column.

APRIL 2, 2018  LONDON—It wasn’t exactly Air Force One. But the heavily armored green-and-yellow train that clunked its way into Beijing last week didn’t just bring the prospect of a high-stakes nuclear summit between North Korea’s Kim Jong-un and US President Trump a step closer. It highlighted the critical importance, in what comes next, of an increasingly undervalued part of every successful attempt to avert military conflict since World War II.

It’s old-fashioned, nuts-and-bolts diplomacy, and the many thousands of often unheralded men and women who have made it work. They haven’t just been undervalued of late. Some of Mr. Trump’s most vocal cheerleaders have denigrated them as part of a “deep state,” suggesting they’re somehow plotting to frustrate and hobble him on the world stage.

With two nuclear-proliferation standoffs to be dealt with in the weeks ahead – North Korea as well as Iran – a reality check is timely. These career policy experts, whether in the State Department or Defense Department, the National Security Council or the CIA, are exactly what the label suggests. Many have spent years studying the politics, economics, history, and language of the countries in which they specialize. Crucially, they rely on two core assumptions: that international affairs are complex, and that every major decision by the United States or other countries is likely to cause counteractions and carry consequences.

That explains why many are worried about the next two months. They agree with Trump’s policy aim: to rein in the dangers posed by an oppressive, aggressive dictatorship in Pyongyang, and by an increasingly well-armed, expansionist regime in Tehran. What unsettles them is the lack of attention they feel is being paid to the potential implications and complications in how Trump wants to achieve this.

If all goes to plan, he will soon become the first US president to meet with a North Korean leader. To judge from his occasional public statements, and less occasional tweets, his hope is not merely to freeze Pyongyang’s nuclear program, but do away with the warheads and ICBMs it already has. He has been understandably emboldened by his success in tightening international sanctions, and also by his hints at US military action, which he believes have put Kim on the back foot. Trump seems confident that this presumed advantage, along with his own negotiating experience as a businessman, will deliver a summit deal leading to North Korea’s nuclear disarmament.

That would be a truly historic accomplishment. The concern among the policy experts is that there has been so little of the kind of diplomatic spadework that has led to past breakthroughs on similarly complex issues – for instance, President Richard Nixon’s 1972 opening to China. Only two leaders will be at the upcoming summit. But other parties, with both interests and influence, are in the picture: US allies like South Korea and Japan, and China as well. The Chinese, by setting aside their own frustrations with Mr. Kim to welcome his railway car into Beijing, served notice they intend to have their say. President Xi Jinping wants to expand Chinese influence in Asia, and reduce America’s footprint. He’s already been given a boost by the Trump administration through what the policy experts see as a perfect example of the rule of ripples and consequences: Washington’s withdrawal from the Trans-Pacific Partnership, the regional trade agreement negotiated with Asian countries, minus China, during the Obama administration.

The concerns over Iran involve ripples and repercussions of a different sort. By May 12, Trump has indicated that the 2015 agreement to put Iran’s nuclear program on hold will have to be hugely strengthened, or the US will pull out. Yet look at interests and influence again. Russia and China are signatories. So are key NATO allies – Britain, Germany, and France – and the European Union. They’ve all signaled opposition to withdrawing.

Some old-fashioned diplomacy is under way to head off a US withdrawal. The Europeans are trying to find a separate mechanism to deal with areas left out of the existing agreement, such as Iran’s continued development of ballistic missiles. But at least so far, they won’t countenance Washington’s insistence on ending the so-called “sunset clauses” in the agreement, most of which is due to expire by 2030, meaning that a US withdrawal is still looking more likely than not.

A particular fear is that if Washington duly imposes so-called secondary sanctions – to try to prevent European companies, not just US ones, from doing business with Iran – there will be new tensions in the Western alliance. But the main concern involves Iran itself. It is the prospect that a US withdrawal would strengthen the most hardline parts of the Iranian regime; that Tehran might be further emboldened to use its considerable non-conventional force in Syria and southern Lebanon; and that if the 2015 agreement collapses in the wake of a US pullout, only unilateral American or Israeli military action could prevent Iran from resuming its program to develop nuclear weapons.

Finally, they’re concerned about a repercussion that could affect North Korea as well: a weakening of US credibility in negotiating the terms of denuclearization with Kim at a time when America’s commitment to the deal with Iran is proving so fragile.