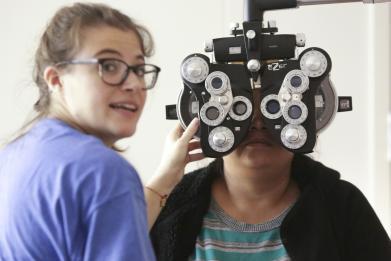 Ocular melanoma, an extremely rare form of eye cancer, is being disproportionately diagnosed among young women in two Southern towns. Doctors do not know why these cases are confined to these cities, and efforts to raise funding to better study the mystery have so far been unsuccessful.

In Auburn, Alabama, with about 60,000 residents, the only common trend between the 33 known cases of ocular melanoma is that every individual either lived or worked in the city between 1980 and the early 1990s, Healthline reported Monday. Of these, 31 were former students at Auburn University, a Facebook page on the phenomena reported.

In Huntersville, North Carolina, with about 54,000 residents, the only connection in another 18 cases is having lived, worked or spent a large amount of time in the town since 2000.

There are more cases of ocular melanoma in Alabama than any other U.S. state, WLTZ reported. Doctors do not believe the cases are a coincidence.

According to the National Institute of Health, ocular melanoma is a type of cancer that affects eye cells, beginning in the middle layer of the eye called the uvea. It is more common in older individuals and those with fairer skin tones and blue or green eyes. Signs of the condition include blurred vision, seeing floaters in your eyes or developing dark spots on the iris. The condition is also more common in men than women.

But in the Southern cases, most of the patients are women, and they are typically younger in age.

In February, Alabama Senator Larry Stutts attempted to get $100,000 in state funding to back research into the eye cancer cluster. The proposal was denied. Auburn University, the alma mater of many of the current patients, also refused to fund research into the cluster, WLTZ reported. The university, however, will lead a committee to find out why so many people associated with Auburn have been diagnosed with the cancer.

Despite the recent setbacks in funding, there are other measures being taken to help identify why this problem is affecting so many Alabama and North Carolina residents. An ongoing study at Columbia University in New York is analyzing tissue from patients who have died or lost an eye to the cancer, The Charlotte Observer reported. Meanwhile, a state backed analysis is mapping patients’ entire lives in an attempt to find similarities.

Carolinas HealthCare Systems has also offered free genetic counseling to residents in Huntersville to see if there is a genetic predisposition to the disease.