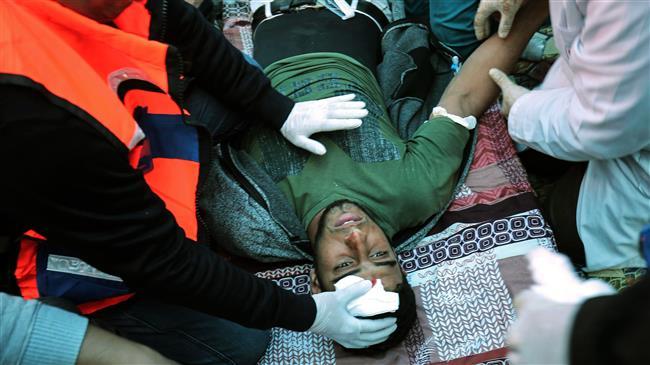 The pan-Arab body convened at the regional grouping’s headquarters in Cairo on Tuesday on an ad hoc basis to address Israel’s attacks on anti-occupation Palestinian demonstrators on March 30.

Gazans on that day marched to the fence separating the enclave from Israeli-occupied lands at the start of a six-week protest, dubbed “The Great March of Return.”

The mass protest, however, turned violent when Israeli military forces used lethal force to disperse the crowd. Besides the 18 killed, some 1,500 Gazans were injured.

Israel had previously deployed military vehicles and special forces, including 100 snipers, to Gaza’s border. The regime’s forces had also been authorized to shoot at the demonstrators.

The Arab League also backed a request by the Palestinian Hamas resistance movement to sue Israel at the ICC for its crimes against Gazans.

“Going to the UN General Assembly to provide protection to the Palestinian people and form an investigation commission will be an option if the Security Council continues to fail,” he added.

The Security Council held an emergency meeting over the mass killings by Israeli forces on Saturday, but failed to condemn the regime as the US hindered a final statement against its ally.

Aboul Gheit’s second-in-command Saeed Abu Ali stressed that the deaths had been caused after Israel deployed weapons against unarmed people.

Israel “has occupied more than 60 percent of the West Bank, builds illegal settlements, and continues to impose a crippling blockade on Gaza,” he added.

The regime has defended its bloodshed in Gaza and even threatened a more violent response to future protests on Gaza’s border.

The Israeli minister for military affairs, Avigdor Lieberman, has rejected calls for a probe into the killing of Palestinians by the regime forces, saying, “We shall not cooperate with any commission of inquiry.”

The Palestinian protests are to reach their high point on May 15, the anniversary of Israel’s Western-backed war of 1948, during which it expelled Palestinians from their homeland before proclaiming existence.