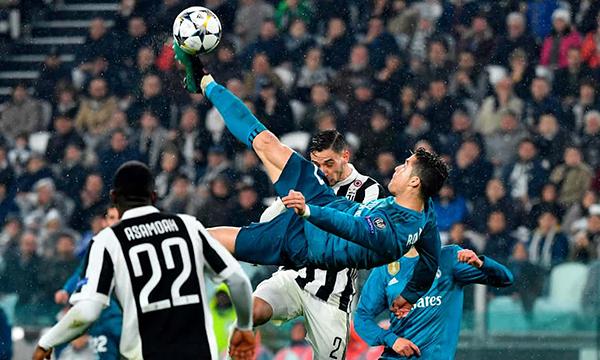 David Hytner at the Allianz Stadium

For a brief moment, there was stunned silence. It felt as if nobody could comprehend what they had witnessed. Then the applause broke out. It came from all sides of this boisterous arena. In great blocks, the Juventus supporters rose to their feet. It was to recognise sporting genius and it did not matter to them that it had come from a rival.

Cristiano Ronaldo had put Real Madrid in control of this Champions League quarter-final with an early close-range finish. He now had them in sight of the next stage and, even by his exulted standards, it was a jaw-dropping intervention.

When Dani Carvajal stood up a cross from the right, Ronaldo instinctively knew that the overhead kick was on. He leapt, hung at high altitude and stretched before swivelling his hips and working a right-footed masterpiece beyond Gianluigi Buffon from behind the penalty spot. The crowd’s reaction was almost as beautiful. When does this ever happen? In the heat of the moment, it felt unique.

Ronaldo’s numbers are freakish and, at the age of 33, they show no sign of letting up. He has 25 goals in his last 14 games for club and country. He has scored in every Champions League tie this season and he leads the field for the competition’s Golden Boot with 14. Something seems to stir inside him when he hears the aria.

Yet the goals cannot be measured by volume alone. Ronaldo has scored plenty of classics. But in a high-stakes game has he ever scored a better one? “It is one of the most beautiful goals in the history of the game,” said the Real manager, Zinedine Zidane.

Juventus were broken. Paulo Dybala, the Serie A club’s great hope, was sent off for a high boot on Carvajal, having previously been booked for diving and, when Ronaldo ushered in Marcelo for Real’s third, it was all over.

Juventus have won the previous four two-legged ties against Real, going back to 1996, but they need a miracle to progress. After the loss to Real in last season’s final in Cardiff, this was another bitter pill. The holy grail of a first Champions League triumph since 1996 continues to feel elusive.

Ronaldo’s statistics had to be updated – and further gawped at – after just three minutes. Marcelo’s switch of feet created the angle for the pass up the left to Isco but it was still shocking to see how much space the Real midfielder had to cross. Ronaldo held his run. Then, he bolted for the near post and, when he connected, everybody knew what would happen next. He has never failed to score for Real against Juventus. This was his eighth goal in six appearances. There would be another one to come.

The significance of the away goal was lost on nobody and the tie became shaped to Real’s liking. Juventus had to push; the defending champions were more than happy to punch on the counter. With Luka Modric and Isco showcasing sumptuous touches, they threatened another before the interval. Raphaël Varane headed over from a corner when unmarked. Toni Kroos thumped a 25-yard drive against the crossbar.

Juventus looked a little frantic as they chased the equaliser but they had their moments, the biggest one coming on 22 minutes. Gonzalo Higuaín volleyed a Dybala free-kick goalwards and it took a wonderful reflex save by Keylor Navas to deny him.

Real were indebted to Sergio Ramos and Varane for important interventions but it felt symptomatic of Juventus’s frustrations that Dybala attempted to win a penalty in the 45th minute with a blatant dive. He was booked. Moments earlier, the home crowd had howled for a penalty when the ball appeared to strike Varane’s arm at close quarters. An award would have been harsh.

The burden on Dybala to create was heavy. He drew a foul from Ramos on 54 minutes for which the defender was booked to incur a suspension for the second leg and Dybala watched his subsequent free-kick deflect wide. His night would end in ignominy.

Ronaldo had gone close at the start of the second half and he should have completed the hat-trick late on while the substitute Mateo Kovacic rattled the bar. Ronaldo looked distraught when he failed to score – a reflection of his unquenchable desire. He had done the damage.