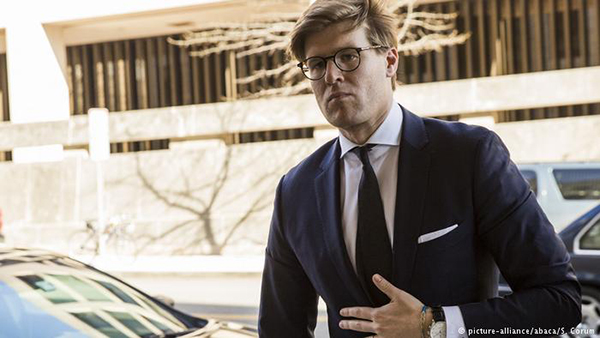 A Dutch lawyer with knowledge of contact between a Russian official and Donald Trump’s campaign staff has been jailed for 30 days. It marks the first sentence in special counsel Robert’s Mueller’s Russia investigation.

A Dutch lawyer was sentenced to 30 days in prison and fined $20,000 (€16,300) on Tuesday after being found guilty of lying to US special counsel Robert Mueller’s investigators about contacts between President Donald Trump’s campaign staff and Russian intelligence officials.

Alex van der Zwaan, the son-in-law of one of Russia’s most prominent business tycoons, was sentenced after pleading guilty to lying about his contacts with Trump’s former campaign deputy Rick Gates and a former member of Russia’s GRU intelligence agency.

Prosecutors alleged that in 2016 van der Zwaan and Gates shared communications with a person they knew to be a former Moscow intelligence official. Prosecutors said the 33-year-old Dutch lawyer admitted to withholding emails and repeatedly lying to Mueller’s investigators about his contact with Gates and the Russian official — referred to in court documents as “Person A.”

Since being called out on his lies, van der Zwaan, who previously worked for the law firm Skadden Arps, Slate, Meagher and Flom, has agreed to cooperate with the investigation.

However, US District Judge Amy Berman Jackson said incarceration was necessary to deter others from lying to Mueller’s investigation.

Van der Zwaan had previously worked with Gates and former Trump campaign chairman Paul Manafort back in 2012, carrying out work on behalf of the Moscow-backed Ukrainian government under then-President Viktor Yanukovych.

Although van der Zwaan appears to be a minor figure in Mueller’s investigation into allegations of collusion between the Trump campaign and Russian officials, his sentencing indicates that the special counsel is prepared to come down sternly on witnesses who impede his  probe.

Although the case against the lawyer is not directly related to collusion, it does shed light on the government’s case against Paul Manafort and undisclosed contacts between Trump’s campaign aides and Russia. Mueller has issued two indictments against Manafort, with charges ranging from failing to register as a foreign agent to bank fraud and filing false tax returns. Manafort has pleaded not guilty.

The details of what van der Zwaan has told Mueller’s team since agreeing to cooperate remain confidential and it is unclear whether they feed into the collusion allegations.

Trump not a criminal target: US media

Also on Tuesday, US media reported Mueller had told Trump’s attorneys that the president is being investigated but is not currently considered to be a criminal target.

Trump has repeatedly dismissed the Mueller investigation as a “witch hunt” and has denied any collusion with Moscow.