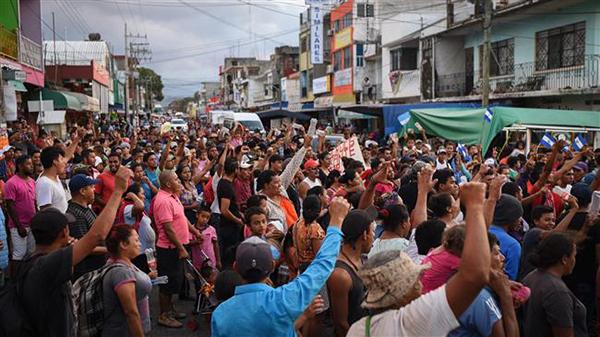 Mexican authorities have effectively stopped hundreds of Central American refugees moving through Mexico toward the United States in a prearranged “caravan,” which has angered US President Donald Trump.

The hundreds of refugees, including women and children, were stopped in the town of Matias Romero in southern Mexico for what the Mexican government has called screening.

Mexico City says it plans to determine whether the refugees have a right to be in Mexico or have to be deported to their countries of origin.

Trump on Tuesday threatened to abolish the North American Free Trade Agreement (NAFTA) — a three-party trade deal that includes Mexico and also Canada — and dispatch military forces to the US-Mexico border to stop the refugees from crossing the border.

Trump also said that he had “told Mexico” that he hoped it would halt the movement of the caravan.

The move by the Mexican government, which has been at odds with the Trump administration over the issue of the refugees as well as NAFTA, may have been a reaction to the US president’s threats.

The refugees were stuck in Matias Romero, awaiting clarification of their legal status after local authorities began registering them.

Confused and frustrated by the paperwork while camping out overnight in a park near the town’s train station, many of the refugees, who have fled criminal and drug gangs in their native countries, were unsure about what laid ahead and were desperate for information.

The Mexican government declared on Monday evening that nearly 400 people in the caravan had already been deported to their countries of origin.

Moreover, Mexico’s ambassador to Washington, Geronimo Gutierrez, told CNN that Mexican authorities were “looking at the status of the individuals so we can proceed either with a repatriation process” or offer humanitarian relief, which could include granting asylum or humanitarian visas.

According to the report, the caravan was organized by US-based advocacy group Pueblo Sin Fronteras, which seeks to draw attention to the rights of refugees and provide them with aid.

The Mexican government has said that the caravan, which like others travels by road, rail, and on foot, has been organized every year since 2010.

The spokeswoman for the group, Gina Garibo, said that many of the around 1,500 people who had joined the caravan in the southern border town of Tapachula since March 25 had broken off from the group, eager to move ahead more quickly. Others planned to remain in Mexico due to family ties and for work.

Honduras, El Salvador and Guatemala are among the most violent and impoverished countries in Latin America, leading to the exodus of citizens in search of a better life elsewhere.

What happens if there is a tie in the Electoral College vote?