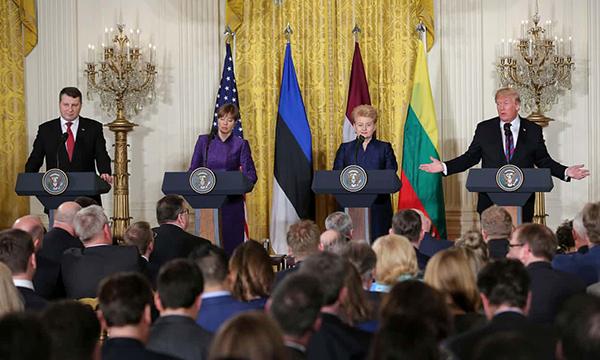 More than an event involving four heads of state, Donald Trump’s press conference with the three Baltic leaders on Tuesday resembled a concert by a hastily assembled Motown covers band.

Trump, the lead singer, dominated the stage, singing familiar songs about everything from Vladimir Putin and Nato to Hillary Clinton’s love of windmills.

The other three performers shuffled awkwardly behind him, trying to keep in tune.

The three heads of state resisted the temptation to sway like the Four Tops when Levi Stubbs grabbed the mic.

The Lithuanian president, Dalia Grybauskaitė, turned her head intently towards the American leader. The Estonian president, Kersti Kaljulaid, stared straight ahead, trying to hide a slight smirk. It emerged occasionally nonetheless. The Latvian president, Raimonds Vējonis, did a little bit of both.

Trump only took one question from an American reporter, which was about US troops in Syria and his announcement last week that they might come home soon. The question was also about his surprise announcement that morning, that he would send US troops to guard the Mexican border.

In answer to the first part, Trump sounded typically confused notes. Listeners were left unclear if American troops would leave Syria soon, or stay, or if it all depended on whether Saudi Arabia would foot the bill.

In answer to the second, he produced familiar themes. The border was unprotected. America needed strong immigration enforcement. His only elaboration on his wish for troops was that he would meet Defense Secretary James Mattis “and everybody” to discuss it “in a little while”.

For Latvia, Lithuania and Estonia, Trump had vague but copious praise. They were industrious nations, he said, filled with tremendous people. They were great places to invest. He even praised their media. Baltic reporters were real news, he said, as opposed to their American counterparts who were – a familiar refrain – “fake news”.

His Baltic backing band tried their best to harmonize. They praised American leadership, touted their own contributions to Nato and noted that the US had been a strong ally during their half-century under Soviet occupation.

They had to do so. After all, as long as they are singing back-up for Trump, he can’t duet with Putin.