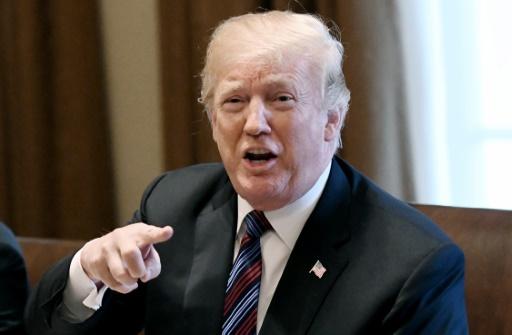 President Donald Trump on Tuesday vowed to deploy the military to secure America’s southern border, as a caravan of Central American migrants heads north through Mexico toward the United States.

The U.S. leader has spent three days attacking the Mexican government for failing to block the estimated 1,500 people from Honduras, Guatemala and El Salvador from walking north towards the border.

“Until we can have a wall and proper security, we’re going to be guarding our border with the military,” Trump told journalists.

He said he had already held discussions with Defense Secretary James Mattis on the issue.

“That’s a big step. We really haven’t done that before, or certainly not very much before,” Trump said.

Trump accused Mexico of abetting and profiting from illegal immigration, which he pledged in his 2016 election campaign to halt.

“The caravan makes me very sad that this could happen to the United States, where you have thousands of people that just decide to walk into our country and we don’t have any laws that could protect it,” he said.

“If it reaches our border, our laws are so weak and so pathetic… it’s like we have no border,” added the president — who lashed out at his predecessor Barack Obama for weakening border security, without elaborating on his claims.

He also railed against the U.S. Congress for not tightening laws on immigrants, and against Democrats for stalling the border wall he promised to build during his campaign.

Trump had previously suggested the military could help fund and build the wall, but it was the first time he proposed U.S. troops to patrol the 2,000 mile (3,200 kilometer) frontier.

The Pentagon had no immediate comment on Trump’s remarks. In the past 12 years, National Guard troops have been deployed twice to bolster border security, but none have been there since 2010.

Mexico’s ambassador in Washington, Geronimo Gutierrez, said he is seeking information on the issue.

“We have formally asked the departments of State and Homeland Security for a clarification on the president’s comments,” he told AFP. “We share the idea of having a safe border but we do not always agree on how to reach that goal. At all times, Mexico will act, naturally, in favor of their interests.”

The Trump administration has sharply bolstered spending on patrolling the border, and intensified crackdowns on undocumented immigrants inside the country.

But the president remains frustrated that other initiatives by his administration to slow both legal and illegal immigration have been stalled or blocked.

After a year’s delay, last month Congress budgeted $1.6 billion to begin construction of the wall, a small portion of the $25 billion Trump asked.

The initial funding might only pay for 100 miles of wall, and Trump last week proposed that the Pentagon’s budget be tapped to build the rest.

The U.S. president’s rekindled anger over immigration was apparently sparked over the weekend by media reports on the migrants heading across Mexico.

Like each of the last five years, the so-called caravan set off recently from the southern Mexican state of Chiapas, partly in protest at conditions faced by migrants, and partly to help migrants safely reach the U.S. border.

Trump says the phenomenon is proof of the need for a wall.

“The caravan which is over 1,000 people coming in from Honduras thought they were just going to walk through Mexico and right through the border,” Trump said. “We cannot have people flowing in our country illegally, disappearing and, by the way, never showing up to court.”