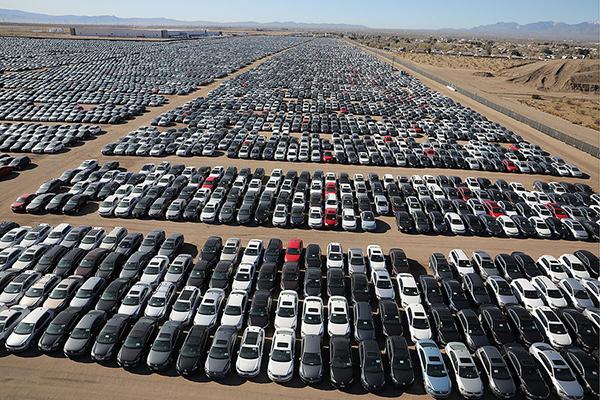 Carmakers haven’t issued a unified call to roll back regulation to improve fuel economy, yet the EPA appears headed in that direction. With high stakes surrounding climate change, the courts could have the final say.

Both those elements are there in the story line. The Trump administration is moving to ease up on automotive fuel-economy regulations, after the auto industry requested a rethink.

But look deeper, and this isn’t the same old regulatory clash from yesteryear.

First, many in the industry want only modest changes to make the rules more flexible, rather than the more major rollback apparently on the way from the Trump Environmental Protection Agency (EPA). Ford Motor Co. last week cautioned the Trump administration against going too far.

Second, the stakes are much higher than a mere ideological duel. The overwhelming consensus among climate scientists is that global warming represents an urgent threat to humanity, and that addressing the human causes must include big changes in the transportation sector. (That helps explain Ford’s position.)

Meanwhile, the environmentalist side of this debate has some hard facts to face up to. Even if former President Barack Obama’s fuel efficiency target – an average of 54.5 miles per gallon for US car fleets by 2025 – were to remain in place, a rapid transition toward electric or “zero-emission” vehicles is far from guaranteed.

Sales of those vehicles are rising but still very small. The major US producer of those all-electric cars, Tesla, has stumbled out of the gate with a model aimed at a mass audience. And the path toward any true “decarbonization” of the transportation sector is fraught with hurdles, such as making electric vehicles convenient to use, producing electric power increasingly without fossil fuels, and figuring out how to decouple economic prosperity from ever-rising miles traveled.

“This [2025 target] is one point along a long trajectory. Even if we did hit the 2025 target, we can’t slow down beyond that point,” says Dave Cooke, an automotive expert at the Union of Concerned Scientists, a group urging action to address climate change. From charging stations to power-grid enhancements to “smart growth” aimed at more walkable communities, “there’s got to be a much more fundamental shift on the infrastructure side of things.”

This doesn’t mean that corporate average fuel economy (CAFE) standards are unimportant. Many experts say the industry is capable of hitting the target finalized at the very end of the Obama administration, thanks to things like lighter materials and more efficient gas-powered engines.

In fact, under the complex CAFE system in which carmakers can get credits for things like more efficient air conditioning, even keeping the Obama administration rules in place wouldn’t mean new-car fleets would actually average 54.5 m.p.g. by 2025.

“We’re actually on track to have 36 miles per gallon,” says Varun Sivaram, an energy expert at the Council on Foreign Relations and author of “Taming the Sun,” a new book on renewable energy.

On Monday, EPA Administrator Scott Pruitt said current CAFE standards are “too high,” and charged the Obama administration with “politically charged expediency” when it cut an evaluation process short in a bid to lock in its standards ahead of the change in administrations.

He also said he would reexamine the waiver that for years has allowed California to set its own alternative standard (which other states can voluntarily follow).

“Cooperative federalism doesn’t mean that one state can dictate standards for the rest of the country,” he said in a statement Monday. “EPA will set a national standard for greenhouse gas emissions that allows auto manufacturers to make cars that people both want and can afford — while still expanding environmental and safety benefits of newer cars.”

The waiver arose because California was pursuing its own air-quality regulation years before the federal Clean Air Act. Today, roughly one-third of Americans live in states that opted for California’s stringent standards.

The rise of ZEVs has some global momentum, thanks in part to the 2015 Paris Agreement on climate change, in which the vast majority of nations agreed to step up efforts to curb carbon emissions.

It’s not just environmental groups calling for concerted action. At Ford, CEO Jim Hackett and executive chairman Bill Ford don’t have a problem with a regulatory nudge toward cleaner cars. “Today, our planet faces increasing challenges [including] climate change,” they wrote on March 27.

They asked not for a rollback of standards but “for one set of standards nationally, along with additional flexibility to help us provide more affordable options for our customers.”

Although improving fuel economy costs carmakers some money (adding modestly to the price of new cars), it also saves consumers money in lower gas-pump prices – or by substituting electric power for gasoline.

“The stringent standards still provide benefits in excess of costs” for the whole economy, even when oil prices are low, Mr. Sivaram says, citing research he did in 2015 with colleague Michael Levi.

Legally, the administration may face a legal test over the standards – one that gets steeper the more it attempts to roll back the rules.

“This is certain to go to the courts; it will be a significant legal battle,” says Cara Horowitz, co-executive director of the Emmett Institute on Climate Change and the Environment at UCLA School of Law. And “the more aggressive the EPA is in reducing the stringency of the existing federal standards, the more difficult it will be for the EPA to justify that evaluation.”

Court challenges could come along two fronts. Opponents could sue to stop any loosening of the rules, possibly citing the EPA’s own finding that greenhouse gases threaten the climate. Also, California could sue if the EPA tries to take away its waiver.

The risk of a years-long legal battle is unsettling for carmakers, leaving them to decide how much to back away from efforts to develop and sell cleaner cars.

“If this doesn’t get resolved for a while, then that really creates a lot of uncertainty,” says David Gerard, a professor of economics at Lawrence University in Appleton, Wis. “If they had a choice between the current rules and not finding out for 10 years, they’d probably choose the current rules.”

Of course, the industry isn’t monolithic and thus strategies vary. Tesla is betting solely on the future of electric cars – but has been challenged in trying to ramp up production of its newest sedans. Toyota has met a good many of the emissions goals with its Prius hybrid strategy.

Some other major car companies are rushing out electric models simply to comply with federal rules, says Bruce Belzowski, managing director of the automotive Futures group of the University of Michigan Transportation Research Institute. Even Nissan, an early innovator with its all-electric Leaf, seems to have fallen back from cutting-edge innovation, he adds. “It makes you wonder about what their strategy is.”

The rise of self-driving cars throws an added wild card into the mix, says Mr. Cooke at the Union of Concerned Scientists in Washington. It’s not clear if it’ll reduce or expand the overall number of miles traveled – a distinction that matters a lot for total vehicle emissions.

It’s an example he says, of how fuel-economy rules are only one piece of a larger puzzle.

“The industry is global in nature at this point … but so is the problem of climate change,” Cooke says.  And “we are a culture built around the automobile in large respects.”