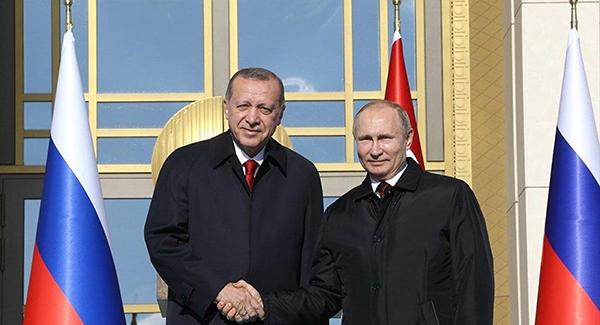 Turkey and Russia have decided to shorten the duration of the S-400 air defense missile systems’ delivery, Russian President Vladimir Putin said on April 3, speaking in the presidential complex in Ankara in a joint press conference held with his Turkish counterpart.

“We have decided with President Erdoğan in our meeting to speed up the delivery of the S-400 systems,” Putin said, referring to the purchase that has raised concerns among Turkey’s NATO partners.

“Our Turkish colleagues made a request in the meetings. We will accelerate the process,” the Russian President added.

“This is an issue of commerce. Companies are working on it,” Putin said.

Answering Western critics of the deal, Erdoğan indicated that Turkey was in no mood to listen to criticism from the West over the purchase of the S-400 systems, saying “this issue is now closed.”

According to Russian press reports, Turkey has also been hugely interested in a technology transfer and even joint production of the S-400s with Russia, a prospect that has been resisted by some in the Moscow security services.

But Putin refused to discuss the issue saying “these are exclusively commercial questions” rather than political ones.

Russian officials had said in December that the first deliveries in the $2 billion deal were likely to begin at the end of 2019 or beginning of 2020.

In a sign of the importance of the partnership, Putin’s visit to Turkey is his first trip abroad since he won a historic fourth presidential mandate in March 18 polls.

Earlier in the day, the Turkish and Russian leaders launched the construction of Turkey’s first nuclear power plant in the southern province of Mersin with a ceremony in the capital Ankara,  laying the ground for the plant on the Mediterranean coast via a video teleconference held at the presidential complex.

The Akkuyu power station — a project costing over $20 billion (16 billion euros) and greatly disliked by environmentalists — was already launched once before in February 2015 but then put on hold due to the row over the downed Russian plane.

Once completed the power station will provide 10 percent of the electricity needs of Turkey, which has few energy resources of its own. The first stage is due to come online in 2023, the 100th anniversary of modern Turkey’s founding, and be completed entirely in 2026.

Erdoğan will host Putin and Iranian counterpart Hasan Rouhani on April 4 to discuss the ongoing Astana and Sochi processes to bring an end to the conflict in Syria.