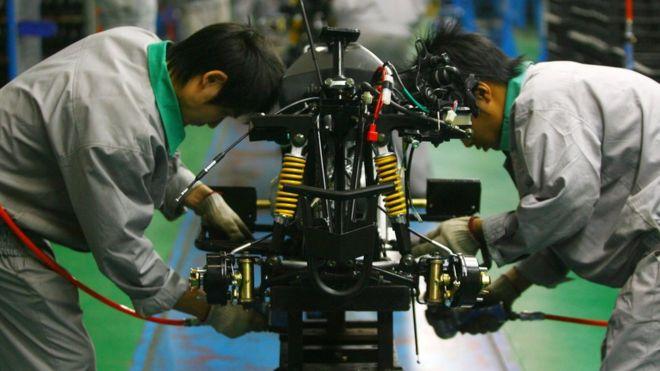 Beijing has vowed to retaliate after the United States published a list of about 1,300 Chinese products it plans to hit with a 25% tariff.

The White House said the proposed extra tax on the imports was a response to unfair Chinese practices around intellectual property rights.

The wide-ranging list includes items such as medical products, televisions and motorcycles.

Beijing said it “strongly condemns and firmly opposes” the tariffs.

“Such unilateralistic and protectionist action has gravely violated fundamental principles and values of the WTO [World Trade Organisation],” the Chinese embassy in Washington said in a statement on Wednesday.

China said the US action did not serve either country’s interests and “even less the interest of the global economy”.

“As the Chinese saying goes, it is only polite to reciprocate,” the statement added.

“The Chinese side will resort to the WTO dispute settlement mechanism and take corresponding measures of equal scale and strength against US products in accordance with Chinese law.”

Economists had previously warned the Trump administration’s move to slap China with the tariffs could prompt Beijing to retaliate and lead to higher prices for American consumers.

The release of the list comes just after China hit $3bn worth of US products with tariffs in response to steel and aluminium tariffs the US has imposed.

The products on the list the US published on Tuesday represent imports worth about $50bn annually.

Last year the US imported goods from China worth about $506bn.

The office of the US Trade Representative, which handles trade negotiations, said the amount was “appropriate both in light of the estimated harm to the US economy and to obtain elimination of China’s harmful acts, policies and practices”.

A final list will be determined after a public comment period and review, expected to last about two months.

The plans for tariffs are the result of an investigation that US President Donald Trump ordered last year into China’s intellectual property practices.

Last month, he said the probe found evidence of problems, such as practices that pressure US companies to share technology with Chinese firms and ordered a list of products drawn up for tariffs.

Hopes for a resolution

When announcing its intentions to retaliate against the US tariffs on Wednesday, the Chinese embassy in Washington said it hoped the US would “with sense and long-term picture in mind, refrain from going down the wrong path”.

US business groups have also urged the two sides to try to resolve the issues through talks, expressing concern that threatening tariffs could lead to a dispute that hurts the US economy.

The US Chamber of Commerce said: “The administration is rightly focused on restoring equity and fairness in our trade relationship with China. However, imposing taxes on products used daily by American consumers and job creators is not the way to achieve those ends.”

China’s economy has become less dependent on exports in recent years, which is likely to blunt the effect of the tariffs, according to analysts for S&P Global Ratings.

They said the US is the destination for only about 15% of China’s good exports.

The list includes parts of communication satellites, semiconductors, aviation equipment and brewery machinery, as well as more niche products such as bakery ovens and rocket launchers.

Joseph Brusuelas, chief economist at RSM US, said he did not think the Chinese would take the list seriously, pointing to low-demand items like monitors with video cassette recorders.

Instead, he said the main outcome was likely to be higher prices for American manufacturers – and, eventually, consumers.

That may not be enough to persuade the Trump administration to opt for a different strategy, he added.

“At this point, if the Trump administration does not follow through on this they’re going to lose face and credibility,” he said.