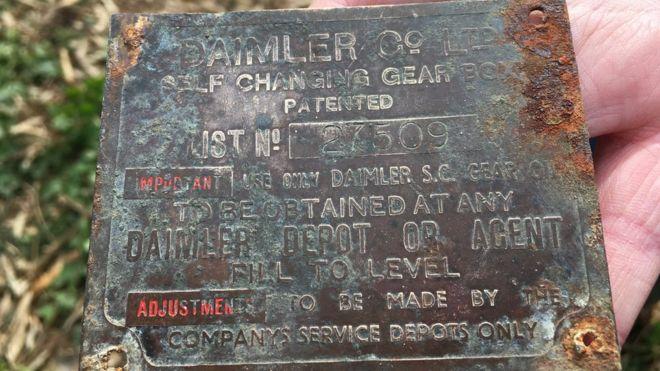 A homeowner’s landscaping session took an unexpected turn when she unearthed a classic car buried in her back garden.

Tracy Ward, from Guernsey, and her father Brian Russell were digging out a rockery when the pair started to find pieces of metal.

Local car experts said a number plate and gear box indicate it is a Daimler, probably from the 1940s or 1950s.

Ms Ward said she was “very surprised” by the discovery, while Mr Russell said he believed other parts had yet to be unearthed.

“We’re scraping the top of the barrel at the moment,” said Mr Russell.

Heather Fattorini, from the Guernsey Old Car Club, said the reasons for the burial were “all a bit of an unknown”.

She said a previous owner of the house in St Peter’s may have started renovating the vehicle before giving up and putting the rockery over the car to “hide it”.

Club president Michael Fattorini said the unearthed remains suggest the model may be from the 1940s or 1950s.

He says the discovery of the car’s number plate would assist in establishing its age.

“It’s a Daimler, there’s no question about that,” he said. “The radiator is a Daimler radiator, the plate on the gearbox is a Daimler plate.”

Ms Ward said: “Ideally if it’s of interest to anybody we’d like them to come and take it away.”

She added, if it was not claimed, it was likely to be reburied, or taken to the scrap yard.