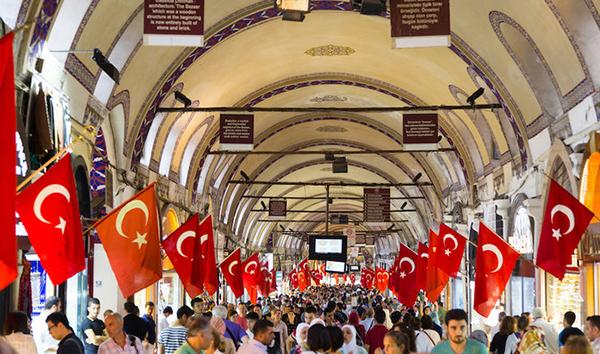 London: Turkey’s growth could fall by almost 50 percent as the country grapples with inflation and a debt burden that could weigh on investor confidence, especially if US interest rates ratchet up.
Credit ratings agency Standard & Poor’s (S&P) on Wednesday warned that Turkey was “particularly vulnerable” to rising global interest rates because of the strain of having to finance a debt burden that had widened the current account
deficit to $47 billion, above 5 percent of GDP.
In a stark message for the country led by Recep Erdogan, S&P forecast a 46 percent fall in GDP growth in 2018 to 4 percent from 7.4 percent in 2017, as Istanbul gradually withdraws a policy stimulus.
S&P said: “The Turkish economy is particularly vulnerable to a deterioration in external financing conditions due to its persistent debt-financed current account deficits and high external financing needs.”
The agency said Turkey is exposed to potential shifts in credit conditions, notably in terms of the rollover and cost of funding. It added that the recent US financial crimes investigation into state-owned lender Halkbank could have significant political and economic implications for Turkey and damage investors’ perceptions of risk in the country.
It added: “(But) we take some comfort from Turkish banks’ still significant holdings of foreign currency assets and high rollover rates of external debt.”
Turkey’s economic expansion has been impressive in recent years, but has led to warnings from the IMF about higher inflation and the deepening deficit.
The government introduced a series of incentives to stimulate the economy in the aftermath of a failed military putsch in 2016, spanning loan guarantees and spending on infrastructure.
Separately, S&P also noted that Qatar pumped about $43 billion into banks last year after a boycott by some of its neighbors caused a drop in deposits. The Qatari government and state-controlled companies injected cash into the financial system after about $22 billion of deposits flowed out of the country between June and December, confirming a
report in February by Bloomberg.
Qatar is in a standoff with neighboring states, who accuse it of supporting terrorism. Doha denies that it supports terror groups. Nevertheless, a boycott was imposed by GCC countries on Qatar in 2017.
S&P said the measures had exacerbated Qatar’s external vulnerabilities and put pressure on the country’s economic growth and fiscal metrics. “Under our base case, we assume that the current boycott will continue for an extended period, but will not materially escalate.”
The S&P report is part of an overview of global credit conditions. Looking at emerging markets (EMs), generally, it said the international backdrop remains encouraging for EMs. Ongoing economic expansion was said to be boosting external demand for both commodities and manufactured goods. For now, interest rates remain relatively low, “underpinning the continuing interest of cross-border investors EM assets.”
But there were lingering external risks. “Cross-border investors pulled out $4.5 billion from EMs in February, according to the Institute of International Finance, amid heightened concerns about the outlook for US inflation and interest rates. While the turmoil was shortlived, it signals a more challenging environment for EMs with respect to external financing compared with a very favorable 2017. A steeper path for advanced economies’ yields point to a slowdown in foreign flows to EMs, as interest rate differentials between developed and emerging markets narrow. At the same time, a weaker US dollar should limit pressure on flows to EMs.”
S&P also warned about the ramped-up trade war between the US and China, and heightened geopolitical risk arising from the recent appointments of a more hawkish US secretary of state and national security adviser. “This raises the prospect of the US pulling out of the Iran nuclear accord in May, raising tensions in the region. It would not take much to trigger a bigger correction in financial markets than we saw in February,” said S&P.