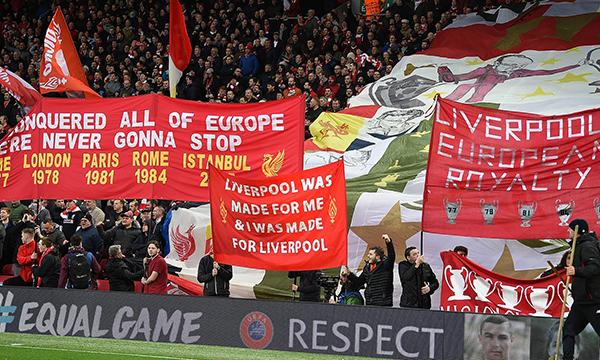 Everybody knew what Jürgen Klopp meant when he said, more than once, that the tie was still not over. Liverpool, he reminded us, had already lost by five goals at Manchester City earlier in the season. So, yes, it was easy to understand why the victorious manager wanted to sound a note of caution at the end of a thrilling night for the club depicted by one of the banners on the Kop proclaiming “European royalty.”

All the same, it would be a remarkable feat of escapology if City were to save themselves now and if Klopp’s side can play like this again maybe the Liverpool supporters could be forgiven for wondering whether this will be the season to update all those others banners showing the various years – 1977, 1978, 1981, 1984, 2005 – when the European Cup has resided inside Anfield’s trophy cabinet.

OK, perhaps best not to get too carried away just yet but Liverpool could hardly have wished for a more emphatic victory. They swept aside City with a 19-minute blitz of first-half goals and, to put it into context, if Liverpool can score in the second leg it will mean Pep Guardiola’s team need five. One certainty is that Klopp will not see it as a night for conservatism and, judging by the way City defended here, the five-time winners should be confident about adding to their total when they head along the M62 next Tuesday night.

Liverpool certainly kept to their promise that they would not be cowed by the fact their opponents, lest it be forgotten, are currently 18 points above them at the top of the Premier League. A more restrained team – not least some of the great Liverpool sides who have won this competition – might have tried to slow down the game once they had raced into a 2-0 lead inside the opening 20 minutes. Not Klopp’s team, though. Why put on the handbrake when everyone was having so much fun? Then Mohamed Salah clipped in a ball from the right and Sadio Mané headed in their third goal, with half an hour on the clock, and Liverpool still went searching for more. To hell with conservatism – this was the modern Liverpool, high on confidence, with a front three who could trouble any defence, let alone one looking as vulnerable as City’s.

Klopp’s view was that the only way to take on the Premier League champions-in-waiting was to attack with pace and adventure, pin back the opposition full-backs and hope, perhaps, to catch Vincent Kompany and Nicolás Otamendi having a poor evening. After that, Klopp needed his players to be ruthless and he got all of that during the period of the game when Salah and Alex Oxlade-Chamberlain also scored.

For City, that made the opening 30 minutes a calamity and Oxlade-Chamberlain certainly chose a good night to produce the outstanding moment of his Liverpool career to date. He struck his shot with the kind of power that might have reminded Liverpool fans about the way Terry McDermott used to drive through the middle and let fly from 25 yards. It was a tremendous finish but the chance would never have even presented itself were it not for James Milner dispossessing Ilkay Gündoğan inside his own half. Gündoğan was caught on the ball and that little snapshot felt typical of how the first half ran away from the team in blue.

Guardiola had left out Raheem Sterling to involve Gündoğan, with Kevin De Bruyne starting in a more withdrawn role than usual, and Gabriel Jesus having to make do without the support in attack he might usually receive.

Guardiola was entitled to think Sterling has played poorly on his previous returns to Anfield but perhaps City’s manager might have been better off sticking with his usual tactics. Jesus looked isolated at times, especially with Leroy Sané clinging to the left, and it was not a surprise when De Bruyne switched to a more attacking right-sided position in the second half. Sterling was brought on in the 56th minute, meaning De Bruyne then took up the No 10 role, and Salah’s withdrawal with an injury four minutes earlier also had an impact on how the rest of the second half took shape.

For the first time, Liverpool started to look like a team whose priority was to ensure they kept a clean sheet rather than one trying to extend their lead. Even then, City seldom threatened to score and it was difficult to think of the last time they have looked so ineffective going forward.

Guardiola’s players had plenty of the ball but Loris Karius, Liverpool’s goalkeeper, was seldom troubled.

Liverpool will desperately hope Salah is available for the second leg and it is inconceivable City will be so vapid again. Yet the opening goal was also a reminder that it might suit Liverpool if they have to play on the counterattack. City had passed the ball with great elegance during the opening exchanges but the game slipped away from them as soon as Salah’s pass gave Roberto Firmino the first chance to test Ederson, the away team’s goalkeeper. The shot came back off Ederson and Kyle Walker could not adjust his feet. Firmino had Salah to his left and the Egyptian’s 38th goal of the season put Liverpool on their way to a raucous victory.