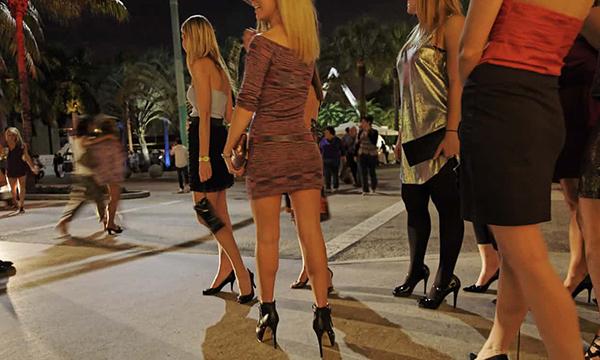 It doesn’t matter what women wear or how they behave – if things go badly, they will be blamed

What can I wear on a night out to ensure I have a good time and no one will give me a hard time later?

Tricky question, Charlotte! What we first have to decide is what you mean by “night out”, “good” and even “I”, come to that. Apologies for the linguistic nitpicking, but these are the kinds of issues you really need to lock down, should your night out end, shall we say, badly.

Last week, women got a reminder that if they say they were assaulted on a night out, they will almost certainly be blamed, from what they wore to the text messages they sent. This time, the reminder came courtesy of what the media have dubbed the Belfast rape trial, in which Irish rugby players Paddy Jackson and Stuart Olding were cleared of raping a 19-year-old woman, and two of their friends, Blane McIlroy and Rory Harrison, were cleared of indecent exposure and perverting the course of justice, respectively.

Perhaps some of you have heard about this trial, in which a young woman went out to celebrate the end of her exams and came home crying in the back of a minicab and with vaginal bleeding. Perhaps you heard about the WhatsApp messages sent between the young men afterwards, including: “There was a lot of spit roast last night” (Jackson); “It was like a merry go round at the carnival” (Olding); and “Love Belfast sluts” (McIlroy). Perhaps you heard about the messages the woman sent the next day, including: “What happened was not consensual” and “I’m not going to the police. I’m not going up against Ulster Rugby. Yea because that’ll work.”

But perhaps you have not heard some of the extraordinary questions the woman was asked during the trial, because, as invariably happens with these stories, she was the one who seemed on trial. It’s weird how this only really happens with alleged victims of rape, isn’t it? Imagine if your laptop was taken and everyone knew who now had it, but all inquiries focused on why you bandy your laptop so freely, why you claim someone took it when everyone knows you gave it ever so willingly, and how dare you own a laptop anyway when obviously someone will take it and who could blame them? Anyway, I digress.

Among the issues raised during the trial were, why did the woman talk about her feelings in the second person as opposed to the first person, with the suggestion that she was repeating something she had read rather than relaying her own experiences; what is meant by using terms such as LOL and HAHA in text messages and: “Why didn’t she scream the house down? A lot of very middle-class girls were downstairs. They were not going to tolerate rape or anything like that.” Yeah, unlike those working-class lassies, who love a bit of rape. They barely notice it, really, what with it being part of their peasanty culture and all. Really, you think a WhatsApp group between rugby players shows you the nadir of misogyny – until their legal team starts talking.

And then, of course, there were her bloodstained clothes: why were they not bloodier? Why were there fake tan marks inside them? On and on it went. And we all know how it ended. The woman knew even before it began.

So, in short, what women have learned from millennia of this is that, if they leave the house and things go badly for them, they will be blamed. Bleeding from the vagina? You should be bleeding more. Did you smile at him? You asked for it. Did you not smile at him? You hurt his feelings. Were your clothes sexy? You’re a slut. Were they frumpy? You’re a frigid bitch. Did you ever send jokey text messages to your friends? Then you’re an untrustworthy bubblehead. Did you go to the doctor straight away? That’s suspiciously efficient for a crime victim. Did you not go to the doctor? That’s because you’re lying. Did you tell the police everything? You were coached. Did you not tell the police everything? You’re lying.

So it seems, Charlotte, the only thing you can safely wear when you leave the house is an invisibility cloak. And even then, you’ll still be at fault somehow. Happy to help with your fashion query!