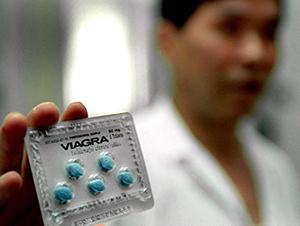 On March 27, Viagra celebrated its 20th anniversary. Over the past two decades, millions of men have taken the erectile dysfunction drug, which rakes in about $1.5 billion per year on average. In the process, the little blue pill has become a cultural touchstone, with mentions in rap lyrics, on TV shows and in movies—even starring in one, 2010’s Love & Other Drugs .

And as with any classic, knockoffs have followed. Sexual enhancement supplements sold online and at corner stores promise performance improvements without a prescription. All a customer needs is a working credit card or the ability to ask the cashier for Tyrannosaurus Sex or Stiff Nights with a straight face.

These supplements, advertised as “natural,” have the U.S. Food and Drug Administration alarmed. In violation of FDA regulations, many brands contain a hidden and sometimes harmful modification of sildenafil, Viagra’s active ingredient, or another compound found in FDA-approved erectile dysfunction medications. The FDA has been chasing the purveyors of these products for years, but so far the effort has only resulted in revealing the agency’s, well, impotence.

Among the compounds capable of producing an erection, sildenafil is the easiest to counterfeit. “The raw materials are more readily available and cheaper,” said Koh Hwee Ling, a pharmacologist at the National University of Singapore.

But sildenafil carries serious side effects when taken with certain medications, such as dangerously low blood pressure. “Let’s imagine a sedentary 70-year-old gentleman who suffers from coronary artery disease,” says Dr. Edgardo Becher, a urologist affiliated with the University of Buenos Aires. If he dies of a heart attack after taking one of these supplements, Becher explains, no one will suspect that the pill caused his death because the modified sildenafil is not indicated on the label.

Tracing these hidden drugs to their source—to the various distributors, wholesalers and retailers around the world—is often impossible, says Brad Pace, who directs the FDA’s division of nonprescription drugs and health fraud. His group has had some success. In 2011, Kelly Harvey, the owner of NovaCare, which sold tainted sexual enhancement and weight loss supplements, pleaded guilty to six felony counts related to the products and received a 36-month prison sentence. And in 2016, following 29 consumer warnings and recalls in 2010, a federal judge sentenced Gustavo Barni, who owns Atlas Operations, a supplement supplier, to six months in prison for fraud.

But as soon as one company is caught, another replaces it. “It’s just a cat-and-mouse game,” says Dr. Pieter Cohen, an internist at Cambridge Health Alliance who has researched tainted supplements extensively. In November 2017, the FDA issued consumer warnings about more than a dozen of these products, and a settlement in March forced yet another company to test its supplements before making more of them. A pilot program to check packages arriving at international mail facilities for suspicious goods found 119 products with sexual enhancement claims on the label, 95 of which contained an undeclared active ingredient.

Generic sildenafil, which came on the market in December 2017, might put a dent in counterfeit sales. The more affordable price tag—$25 per pill versus about $70 for Viagra—could help consumers avoid shadier supplements. And with these legitimate pills, the active ingredient is easy to identify. Just look at the label.