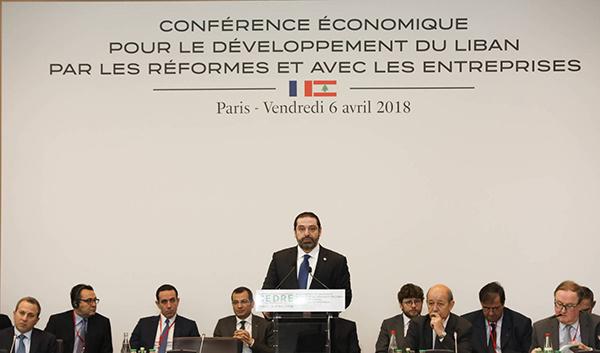 Also referred to as Paris IV, the meeting has taken center stage in the French capital, and gathered ministers and investors from 50 countries.

LONDON: Lebanon secured over $11 billion in soft loans and grants from international donors at a conference in Paris as the international community pledged support to help the debt-ridden country revamp its ailing infrastructure and bolster its economy.

French President Emmanuel Macron praised the international community’s “unprecedented mobilization” for Lebanon as crucial for building the conditions for a sustainable peace in the Middle East.

“At a time when the Levant probably lives one of the worst moments of its history … it’s more important than ever to preserve the most precious asset: a peaceful, diverse and harmonious Lebanon,” Macron said.

Lebanese Prime Minister Saad Hariri, who met with Macron on the sidelines of the conference, outlined his country’s grim situation, saying his nation’s stability is at stake. Hariri also warned that a collapse in Lebanon could ricochet throughout the Middle East and Europe.

“We are a little country facing enormous political, economic and security challenges and these challenges are exacerbated by the war in Syria and the crisis of displaced Syrians in Lebanon,” Hariri said.  “It is not the stability of Lebanon alone. This is the stability of the region and, therefore, of our world.”

In total, donors committed $10.2 billion in loans and $860 million in gifts, France’s ambassador to Lebanon Bruno Foucher said on Twitter.

“In the Middle East shaken by crises and wounded by civil wars, Lebanon has remained the model of pluralism, tolerance, and openness which is what we need,” he said.

“But Lebanon is not an island. It’s borne the full force of regional tensions and the Syria crisis. It combats terrorism on its borders and in its own country, and with more than a million refugees, it has taken more than its share of the Syrian exodus,” Le Drian added.

The Cedre conference, also referred to as Paris IV, has brought together ministers and investors from 50 countries.

Those gathered in Paris included Saudi Arabia, which has seen its relationship with Lebanon strained in recent months; However, the kingdom reinstated a $1 billion credit line to Lebanon.

Great Britain lent a helping hand as well, announcing soft loans totaling $170 million while Germany is expected to put forth $75 million. The US, on the other hand, announced a $110 million grant. The Netherlands, also present, announced a $300 million concessional loan.

These funds would be used to implement the first of three phases of an ambitious $16 billion capital investment programme, spread across the next 12 years officials said, with each phase divided in four years each.

The program entails around 250 projects in the electricity, water, and waste management sectors, among others, according to official statements released ahead of the conference.

The private sector is expected to play a significant role this time around, however, in stark difference to the past three Paris conferences.

Officials have maintained that the private sector would finance around 40 percent of the program, while any grants and loans received would be used for the remaining 60 percent.

Yet some view these soft loans – with an interest rate of around 1.5 percent over a period of 20 to 30 years – as an extra layer of debt.

Lebanon is currently the third most indebted country in the world, with a public debt that is estimated at 150 percent of GDP or $80billion.

Experts have continuously warned of a Greek-like crisis if government spending fails to keep pace with revenue.

Last week, Lebanon passed only its second budget since 2005, seen as a prerequisite for its success in Paris. While Parliament was in session, Hariri decried the wide level of corruption bleeding the state’s coffers, vowing to “hold those guilty accountable.”

Cedre is the second of three international conferences aimed at bolstering support for Lebanon’s different institutions this year.

Last month, Lebanon succeeded in acquiring hundreds of millions of dollars in pledged loans to boost its security apparatus and army while in Rome.

Up next is the Brussels conference scheduled later this spring, which will focus on the Syrian refugee crisis which has taken its toll on the small Mediterranean country.