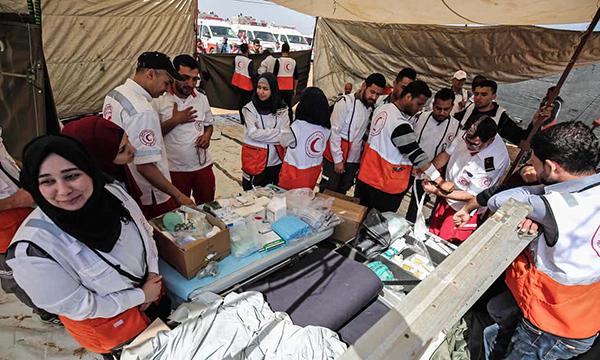 At least seven Palestinian men have been killed and scores more injured by Israeli gunfire on the Gaza border, a week after 18 Palestinians were killed at similar demonstrations.

The renewed violence came despite a call by the UN secretary general, António Guterres for Israel to exercise “extreme caution”. His appeal was echoed by the UN human rights spokeswoman Elizabeth Throssell who said unjustified recourse to live fire could amount to wilful killing of civilians – a breach of the fourth Geneva convention.

Figures for the dead and injured were supplied by the Hamas-controlled health ministry in Gaza and a website associated with the group. The most seriously injured had reportedly been shot in the head or upper body. Another Palestinian who had been injured in last week’s protests also died on Friday from his wounds.

The deaths came as thousands of protesters streamed towards a series of protest camps along the border for a demonstration calling for Palestinian refugees’ right of return.

Under the cover of smoke from burning tyres, dozens of protesters approached the fence in one area, despite warnings by the Israeli military that those who did so risked their lives.

Justifying its response, the Israeli military said: “Several attempts have been made to damage and cross the security fence under the cover of the smokescreen created by the burning tyres that the rioters ignited.”

Later on Friday, the Hamas leader in Gaza, Yahya Sinwar, visited the Khuza’a camp, receiving a hero’s welcome. Sinwar told the crowd that the world should “wait for our great move, when we breach the borders and pray at al-Aqsa”, referring to the mosque in Jerusalem which is the third holiest site in Islam.

His address appeared to be the first time a Hamas leader specifically threatened to break through the border, something Israel has said it would not allow at any price.

Among those wounded was Mohammed Ashour, 20, who was shot in the right arm. “We came here because we want dignity,” he told reporters from his stretcher before paramedics carried him to an ambulance.

Fresh violence had been widely anticipated after the protests on 30 March, when thousands of Gaza residents participated in the demonstrations, many gathering in five tented encampments that had been set up from north to south along the narrow coastal strip’s border with Israel.

According to reports in the Israeli media, the Israel Defence Forces had been anticipating that as many as 50,000 demonstrators could participate on Friday, with the rules of engagement allowing live fire to be used against anyone who approached the border fence.

A Guardian reporter at the demonstrations, however, suggested a far lower turnout than last week, when about 30,000 people demonstrated.

Among those who turned up was Ali Bakroun, 19. “I came here with my friends to fly the kite we made this week,” he said. “I wrote our names on it. We got close to the fence to throw stones but we stayed in a low place so we would be under cover. I’m not afraid to be shot or killed because our land deserves our lives.”

In a statement, the Israeli military underlined its determination to prevent any protesters approaching close to the fence. “The IDF will not allow any breach of the security infrastructure and fence, which protects Israeli civilians, and will act against those who are involved in these attacks,” it said.

Guterres issued a statement from the UN saying: “I particularly urge Israel to exercise extreme caution with the use of force in order to avoid casualties. Civilians must be able to exercise their right to demonstrate peacefully. I call upon all parties on the ground to avoid confrontation and exercise maximum restraint.”

The Gaza Strip’s border with Israel is highly sensitive for both sides. Overseen in places by observation balloons, in other places the border consists of a double fence and an Israeli security road.

As tensions mounted on Friday, Israeli forces fired teargas that landed inside the encampment near the large agricultural village of Khuza’a, briefly sending people fleeing.

Yehia Abu Daqqa, a 20-year-old student, said he had come to demonstrate and honour those killed in the past. “Yes, there is fear,” he said of the risks of advancing toward the fence. “We are here to tell the occupation that we are not weak.”

Friday’s march was the second in what Gaza’s Hamas rulers have said would be a series of several weeks of protests against a decade-old blockade of the territory. Israel has accused Hamas of trying to carry out border attacks under the cover of large protests and said it would prevent a breach of the fence at all costs.

A White House envoy urged Palestinians to stay away from the fence. Jason Greenblatt said the US condemned “leaders and protesters who call for violence or who send protesters including children to the fence, knowing that they may be injured or killed”.