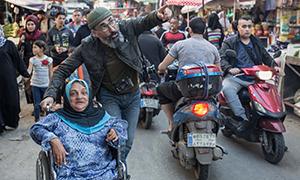 For nearly 33 years, Samar Baltaji was the one-legged mother in the photo, holding the hand of her maimed daughter, Nisrine, as they walked through a landscape of Beirut at war.

In a simple skirt and blouse and with a transistor radio on her hip, she stared straight into the camera of a young photographer, Maher Attar, who was covering clashes near the Sabra Shatila Palestinian refugee camp. His photo made the front of the New York Times, capturing Lebanon’s disintegration like few other images in the 15-year conflict and launched his career.

In the decades since, the stillness of mother and daughter under a stark summer light remained a defining image of the civil war – one of simple dignity in the face of carnage and prevailing against formidable odds.

Last week, the photographer and his subject came face to face again. Maher was going to a gym in Beirut’s Verdun district. Samar was begging nearby. Now a double amputee – her second leg was lost to bone disease 12 years ago – the pair said they instinctively knew each other. “I said ‘I’ll give you a clue – smile,” Attar said. “And she replied straight away: ‘Maher’”.

Samer remembers that moment in time, 2 June 1985, as a rare ceasefire after days of fighting between Palestinian factions and the Shia militia group Amal. “They caught Maher and beat him up,” she said. “He was taking pictures from the car window and he dropped his camera. I gave it back to him.”

Samar slowly forgot about the brief encounter. She had a young family to raise in a city that was not functioning. The threat of another rocket, like the one that took her leg in her living room, remained very real. Her health steadily disintegrated until she lost her second leg. With four children to feed, and with little state support for her or any of Lebanon’s estimated 150,000 civilians wounded by war, she took to the streets.

“My husband died. My son is working but our rent is $400 per month and I figured out that if I begged I could make enough money to ensure we did not have to touch the rent money,” she said this week. “No NGO or charity has helped me. Just the streets and the people.”

Family life has also been challenging for Samar. Her husband, Ziad, was electrocuted eight years ago and a feud with her daughter saw her leave home. “I gave up my leg to save hers in 1982 – they needed cartilage from mine – and after her father died she kicked me out.”

Now, her face leathered by sun, and her tiny frame barely rising above the back of her wheelchair, she says she regrets little about her 58 years. “Sometimes I sit on the balcony and think and I begin to cry. And then I think I’m lucky to be alive and I go back to being patient.”

Maher says the chance meeting has left him with a “personal duty” to help Samar. “Maybe it’s my age, maybe it’s the fact that I’m made, but I need to do something,” he says.

The pair had been briefly reunited once before when a TV show went looking for icons of the war in 2005. “But it was short and I was told she was being looked after,” Maher said. “Now I know she needs help.”

On Wednesday, Samar and Maher went back to the spot in the Sabra Shatila camp where their encounter took place. They moved past two cemeteries, where some of the war’s dead are buried, looking for the precise location. “It’s here!” shouted Samar, stopping near a building pockmarked by bullets.

“It’s 50 metres further,” said Maher. In the end, both were wrong – they were facing the wrong way. When the site was finally settled on, or close enough to it, the now 55-year-old photographer and the once young mum both seemed their age. And both seemed content. He called her “auntie”. She called him “brother”.

“I swear I’m better for knowing you,” said Samar. The feeling was clearly mutual.

Before they parted, Samar was asked to reveal the song playing on the radio as she hobbled through the war zone.

It was a love song called They Ask Me, by Warda, an Algerian singer. On that day, it was a vignette to a lull in the chaos. Now, it has become a soundtrack to a life of loss and dignity. Hearing it again made her cry.