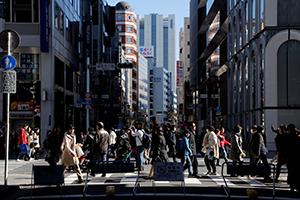 While sales of foreign-brand vehicles have been solid in the past few years, the fall in Japan’s new car sales last fiscal year due to an inspection scandal at major Japanese automakers helped push the ratio up, the Japan Automobile Importers Association said.

Sales of foreign-brand vehicles in fiscal 2017 rose for the third consecutive year to reach the second-highest level following fiscal 1996. Sales were buoyed by the popularity of clean diesel engine cars and sport utility vehicles, the JAIA said.

Domestic sales of vehicles other than minicars with an engine displacement of up to 660 cc stood at 3,338,234 units, down 0.6 percent in fiscal 2017, according to the Japan Automobile Dealers Association and the Japan Light Motor Vehicle and Motorcycle Association.

Among imported brands, Mercedes-Benz held on to the top spot with a record 68,437 vehicles sold for a 19.48 percent market share, while BMW came in second with record sales of 51,299 units for a 14.60 percent share.

Volkswagen ranked third with sales of 48,152 vehicles for a 13.70 percent market share.

Sales in Japan of new imported vehicles, including those built abroad by Japanese automakers, rose 1.3 percent in fiscal 2017 from the year before to 351,363. Sales of Japanese-brand vehicles dropped 1.3 percent to 47,443.

Among Japanese brands, seven minivehicles made the top 10 ranking, with Honda Motor Co’s minicar N-Box becoming the best-selling car in fiscal 2017. N-Box clinched the top spot for the first time with sales of 223,449 units, up 16.2 percent from a year earlier, thanks to its revamped model introduced in September last year.