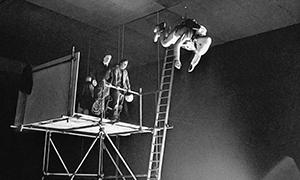 Stanley Kubrick is revered for pushing cinematic boundaries with his cult sci-fi classic 2001: A Space Odyssey. But, for art’s sake and an obsessive pursuit of realism, the director was prepared to endanger a stuntman’s life, a new book claims.

Bill Weston simulated weightlessness and zero gravity as an astronaut in the film’s extraordinary spacewalk sequences, but Kubrick refused to allow a second safety cable, despite the dangers of performing more than 10 metres (30ft) above a hard concrete floor.

Some of the most demanding scenes filmed at the MGM Studios in Borehamwood – now demolished – were shot without a safety net. Nor would Kubrick agree to the British stuntman having air holes punched into the back of his astronaut’s helmet, in case light was visible through the visor.

He also refused to stop filming even when he was warned that Weston was in grave danger, the book claims.

Weston realised that he was losing consciousness, with oxygen deprivation and carbon dioxide taking their toll. He mustered enough strength to extend his arms into a crucifix pose – an arranged signalling system for an emergency.

Weston, who died in 2012, is quoted in the book saying he will never forget hearing someone urging Kubrick that “we’ve got to get him back”.

The extraordinary episode is revealed in the forthcoming book Space Odyssey: Stanley Kubrick, Arthur C Clarke, and the Making of a Masterpiece. It will be published by Simon & Schuster on 19 April for the 50th anniversary of the film’s release.

Its author, Michael Benson, spoke at length to Weston and the visual effects supervisor Doug Trumbull, who photographed the daredevil stunts, among others.

Kubrick’s masterpieces include Paths of Glory, one of the most powerful anti-war movies. It starred Kirk Douglas, who also played the hero in Kubrick’s Roman classic Spartacus. Kubrick was a supreme visual stylist with a perfectionist’s attention to detail.

2001 was so realistic that the Soviet cosmonaut Alexey Leonov, who became the world’s first spacewalker in 1965, said after seeing the film in 1968: “Now I feel I’ve been in space twice.”

Kubrick, like his lead actors Keir Dullea and Gary Lockwood, was afraid of flying. Yet the most complex shots of his film included Weston playing the dead astronaut Frank Poole, spinning lifelessly.

His stunts involved being suspended horizontally from wires connected to a drill motor against a black abyss of outer space recreated by vast curtains of black velvet.

But Kubrick did not make things easy. He insisted that Weston wore a wig that made his hermetically sealed spacesuit become all the more overheated.

More seriously, a small tank within Weston’s backpack contained only 10 minutes’ worth of compressed air. In his book, Benson writes: “Given the complexity of the shots, and the amount of time it took simply to remove the platform used to prepare the stuntman’s wires and suspend him, 10 minutes wasn’t enough.

“There was another problem. Even when the tank was feeding air into the suit, there was no place for the carbon dioxide Weston exhaled to go. So it simply built up inside, incrementally causing a heightened heart rate, rapid breathing, fatigue, clumsiness, and eventually, unconsciousness.”

Having recovered from the oxygen deprivation, Weston was so outraged that he decided to confront Kubrick, only to find that he had fled the scene. The director did not return for two or three days, Weston recalls. “Because I was going to do him.”

Tempers were soothed after the stuntman was given a swish dressing room with a fridge full of beer and a large raise in his fee. Weston, who went on to perform in numerous James Bond films, says: “One of the great things about Stanley was he had an incredible, tremendous artistic integrity. I think morally he was a little bit weaker.”

Another leading film-maker, Martin Scorsese, has endorsed the book. “Over the years, so much has been written about 2001 and its creation that I thought we knew all that there was to know,” he wrote.

“And then I received a copy of [this] … exciting and exhaustively researched book, which further expands our understanding of what is truly one of the greatest films ever made.”