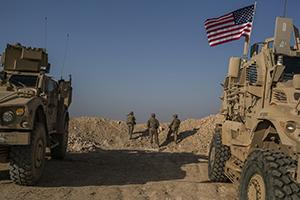 By The Editorial Board

As recently as Tuesday, the Pentagon was advocating an indefinite American military presence in Syria. Speaking in Washington, Gen. Joseph Votel, head of the Central Command, argued that while a coalition of international forces had made progress in degrading the Islamic State, “The hard part, I think, is in front of us.”

What a shock it must have been for General Votel to find out later that, at about the same time only a few miles away, President Trump was supplying a decidedly different vision to the White House press corps: “I want to get out. I want to bring our troops back home.”

We know how Mr. Trump feels. We have long shared the concerns expressed by him and before him, President Barack Obama, about a long-term American commitment in Syria, where ISIS is one combatant in a set of brutal overlapping conflicts that began as a civil war against President Bashar al-Assad in 2001, tore the country apart and, so far, has killed half a million people.

The problem is that, once again, Mr. Trump has an impulse — in this case, he even has the right one — but no strategy, an emotion but little insight into reality on the ground. His call to withdraw troops immediately is at odds with warnings from American commanders who believe that it could lead to a resurgence by ISIS, like the rebound of militants in Iraq after Mr. Obama brought troops home from there. This is a familiar pattern for Mr. Trump: He skips past the hard work of commander in chief, seeking a quick political gain while foisting responsibility for difficult military decisions onto the generals. Fortunately, in this case, the generals have persuaded him to sidestep a quick withdrawal in favor of a more studied approach.

There are roughly 2,000 American troops fighting ISIS in Syria today. In January, Secretary of State Rex Tillerson declared they could expect to remain there indefinitely. Mr. Tillerson also said that the military mission would be “conditions-based,” meaning without either an end date or benchmarks for success. General Votel had a similar message on Tuesday, describing the military’s future role as stabilizing and consolidating gains while “addressing long-term issues of reconstruction,” including training local forces to keep ISIS from regaining a foothold.

Despite his isolationist tendencies, the president seemed to support that approach. Since taking office, he has tripled troop levels in Syria, just as he has also sent more troops to Afghanistan. In fact, Mr. Trump even faulted Mr. Obama for setting a timetable for withdrawing troops from Afghanistan, saying it gave the Taliban the upper hand. Now he has effectively done the same thing by announcing that “it’s time” for the troops to leave Syria.

Mr. Trump is irritated that Saudi Arabia and other Arab nations have not contributed enough resources to the Syria campaign. Fine; as president, he should be able to do something about that, particularly given the close relationship he claims to have with the Saudi royal family. What’s his plan?

The president just doesn’t seem to get that any American withdrawal requires careful thought to ensure we don’t surrender the gains we’ve made, endanger troops on the ground or alienate our allies. What will happen, for instance, to Syrian Kurds who have been crucial American partners in fighting ISIS and now are under attack by Turkey, which considers the Kurds to be terrorists? Or to Israel, which is increasingly concerned about the foothold that Iran, an Assad ally that Mr. Trump has decried as a major regional threat, has gained in Syria?

Besides Iran, another notable American adversary is likely to benefit from the president’s apparent desire to retreat from the Middle East: Russia. Already, Mr. Trump is letting Russia take the lead in Syria, ceding to Vladimir Putin the crucial diplomatic work of forging a political agreement between Mr. Assad and the Syrian rebels. Mr. Putin, an Assad ally, met Iranian and Turkish leaders in Istanbul on Wednesday to plan Syria’s future. How does that serve American interests?