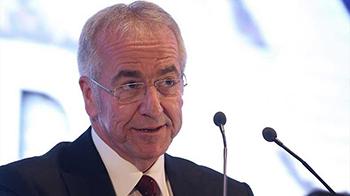 Turkey should leave the course of economic growth based on consumption and foreign loans, Turkish Industry and Business Association (TÜSİAD) head Erol Bilecik has warned.

“There are growing pains based on foreign loans. We are in a situation of growing by borrowing and consuming. Now, we are in the course of recovery from these,” he said during an interview with state-run Anadolu Agency on April 5.

Bilecik recalled that Turkey’s external debt stock now exceeds 53 percent of its national income, coming closer to the level observed in 2011 when the Turkish economy had fallen into a financial crisis.

On the other hand, he praised the fact that exports have a share of 2.6 percent in the annual economic growth of 7.4 percent in 2017.

Inflation should be ‘brought under control’

In order to provide stability of Turkish currency, the inflation rate should be brought under control, the TÜSİAD head stressed during the interview.

“Inflation is like a hidden tax burden on the society. It always has been but we should take it into consideration. The fight against inflation has fallen off the agenda, not only in developed countries but also in developing countries because they have solved the problem. The inflation rate is over the level of 4 percent only in our country and in Argentina,” he said.

“I believe when we execute better a policy to bring the inflation rate under control, the exchange rates will be absolutely stable,” Bilecik said.