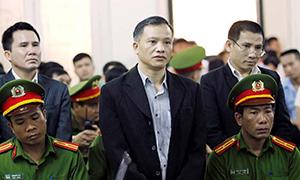 Six Vietnamese activists have been jailed for between seven and 15 years for “attempting to overthrow the state”, the harshest sentences in years in the communist country.

The six, including prominent lawyer Nguyen Van Dai, who got 15 years in jail, were sentenced on Thursday after a one-day trial held under heavy security in Hanoi.

They are linked to the Brotherhood for Democracy activist group and were accused of carrying out human rights training, pushing for multi-party democracy and receiving funds from overseas.

“At the trial today, no evidence showing the defendants’ attempt at overthrowing the state was given,” lawyer Le Luan said. “The charge was very much groundless.”

Dai has long been a thorn in the side of the authorities. He served four years in prison in 2007 for anti-state activity.

Dai was arrested along with his assistant Le Thu Ha – who was sentenced to nine years on Thursday – in December 2015. The others – Pham Van Troi, pastor Nguyen Trung Ton, Truong Minh Duc and Nguyen Bac Truyen – have been in custody since July 2017. They were jailed for between seven and 12 years.

“The trial has been so unfair and illogical. My husband and his friends did nothing wrong,” Dai’s wife, Vu Minh Khanh, said. “All of them refused having committed any crime. Everything they did was not illegal.”

Earlier on Thursday, several supporters of the dissidents were hauled off by plainclothes police as they tried to march to the courthouse in central Hanoi.

The one-party state routinely locks up lawyers, bloggers and dissidents, but critics say a conservative leadership in charge since 2016 is a waging a crackdown that has sent a chill throughout the dissident community. Amnesty International this week said there are at least 97 dissidents behind bars in Vietnam.

Foreign ministry spokeswoman Le Thi Thu Hang rejected claims that activists are being targeted and said the state is “ensuring and promoting human rights” in line with international law.

“In Vietnam, there are no so-called prisoners of conscience and no arrests of people who express their personal viewpoints,” she said, rejecting “biased” information from rights groups.