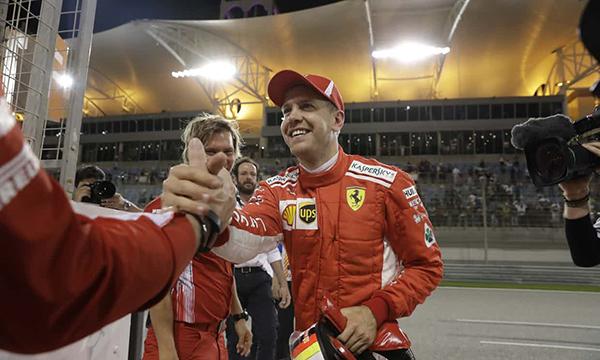 The overriding concern for Lewis Hamilton in qualifying for the Bahrain Grand Prix would have been just how much damage limitation he would have to perform. With a five-place grid penalty for a gearbox change hanging over him he knew that even with a superlative run he would be starting the race on the back foot. The damage transpired to be considerably worse than he would have hoped. Qualifying in fourth to Sebastian Vettel’s pole, leaves a daunting task for the four-time world champion on Sunday.

Vettel took the top spot in an absolutely dominant performance for Ferrari with his team-mate Kimi Räikkönen in second. It is the first time the Scuderia have locked out the front row at the Sakhir circuit since 2006. Hamilton’s fourth means he will start from ninth on the grid. He trails Vettel by seven points in the world championship and knows just how difficult it is going to be to minimise the advantage with which the German could leave Bahrain.

“It’s not going to be the easiest that’s for sure,” he said. “I am going to give it everything I have. Obviously the goal was to get P1 but the Ferraris were just too quick. Hopefully I will at least get up to where [Daniel] Ricciardo is but overtaking from there is going to be tough.”

He was also insistent that the Ferrari title challenge was a serious threat. “Ferrari have been quick all weekend and we have not been able to match them,” he said. “They have done a great job. Car wise they are on a par with us and this weekend they are ahead of us. It is going to be a very close championship.”

Ferrari had indeed looked to have the pace and converted it when it mattered. On the first hot run in Q3 Räikkönen was quicker than Vettel, who went wide on the final corner. On his final run, however, Vettel, who will make his 200th grand prix start nailed the lap superbly and finished with a time of 1.27.958, over a tenth up on Räikkönen. Hamilton had struggled for grip and had no answer. His team-mate, Valtteri Bottas, was in third with Daniel Ricciardo in fifth.

Vettel is already on the front foot, having won in Melbourne, and now has his first pole of the season. He has three previous victories in Bahrain and was understandably confident. In Australia the Mercedes had been clearly quicker and Vettel had not expected to be one and a half tenths up on Bottas.

“I think it’s surprising for us to be, after Australia, that competitive. So, obviously, we have a good base. The car is working,” he said. “Very happy with both laps and happy obviously with the result, with the car, the way the car was handling and responding.”

Ferrari have not won the drivers’ championship since 2007, when Räikkönen claimed the title, and this opening to their campaign is the best possible start to their attempt to end the drought with Hamilton and Mercedes already playing catch up.

The British driver has struggled on occasion to get the most from his car at the Sakhir circuit and making up places at the start will be crucial. There is opportunity to do so, with two heavy braking zones through the first four corners. He also has form in coming through the field here. In 2013 he converted ninth on the grid to fifth and in 2016, after he was clipped by Bottas, he dropped back to ninth but finished in third.

However, Mercedes do not enjoy the advantage they had two years ago and the race, probably a two-stopperfor the leaders, will be instructive on whether they have improved performance when running in dirty air, something they have struggled with in the past. There is concern, too, on how much the car is working its tyres in high temperatures especially in chasing down the leaders.

They did opt to try something different in pursuit of the Ferraris. Hamilton set his fastest time in Q2 on the soft tyre with which he will start the race, offering an alternate strategy to the cars around him on the grid, staying out long on his first stint.

“I have the soft tyre so I should be able to go longer,” he said. “There are a couple of different strategies tomorrow. I will try and eke out every last bit of power and strength from the car.”

There was disappointment for Max Verstappen, who went off on the exit of turn two in Q1, catching the kerb and losing the back of his Red Bull and going into the barriers. He had set a time and will start from 15th.

Pierre Gasly did superbly to put his Honda-powered Toro Rosso into Q3 and he the finished in sixth, which will be fifth on the grid. The Haas of Kevin Magnussen was in seventh, the two Renaults of Nico Hülkenberg and Carlos Sainz Jr in eighth and ninth with the Force India of Esteban Ocon in ninth.

McLaren underperformed with Fernando Alonso in 13th and Stoffel Vandoorne in 14th. Brendon Hartley in the Toro Rosso was in 11th, in front of the Force India of Sergio Pérez.

Romain Grosjean could manage only 16th in the Haas. Williams clearly still have some way to go find the performance in this year’s car, with Sergey Sirotkin in 18th and Lance Stroll in 20th. The Saubers of Marcus Ericsson and Charles Leclerc were in 17th and 19th.