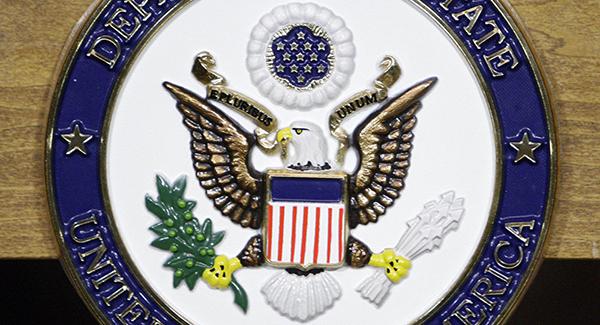 The US State Department told Sputnik on Saturday that Washington is concerned about reports of chemical weapons used in the Syrian city of Douma, and suggested that Russia was responsible “for the brutal targeting of countless Syrians.”

The Department of State also said that at least forty people may have been killed in Douma by chemical weapons, citing third-party organizations.

“We have seen multiple, very disturbing reports this afternoon regarding another possible CW attack near a hospital in Douma, Syria. Reports from a number of groups and medical personnel on the ground indicate at least 40 killed and hundreds injured, with many more families, including children, hiding in shelters but believed to be dead,” the representative said Saturday.

The State Department’s representative also accused Syrian government of chemical weapons use, claiming that “history” of such weapons use by the government of the Arab republic “not in dispute,” and ultimately called Russia responsible.

“We continue to receive reports and assess information regarding the alleged attack. The regime’s [the government of the Syrian President Bashar Assad] history of using chemical weapons against its own people in not in dispute,” the US Department of State’s representative added.

“As we’ve said, Russia ultimately bears responsibility for the brutal targeting of countless Syrians with chemical weapons. Russia’s protection of the Assad regime and failure to stop the use of chemical weapons in Syria calls into question its commitment to resolving the overall crisis,” the representative stressed.

Later, State Department’s spokesperson Heather Nauert said in a statement that the United States calls on Russia to stop supporting the Syrian government and to work on preventing chemical attacks in the country.

“These reports, if confirmed, are horrifying and demand an immediate response by the international community.‎.. The Assad regime and its backers must be held accountable and any further attacks prevented immediately. Russia, with its unwavering support for the regime, ultimately bears responsibility for these brutal attacks, targeting of countless civilians, and the suffocation of Syria’s most vulnerable communities with chemical weapons,” Nauert added.

Syrian state media denied conducting chemical attacks after the reports started to appear, according to Reuters. SANA reportedly cited an official source saying that the media outlets of militants were making chemical attack fabrications to try to obstruct Syrian Arab army advance in the territory.

Previous month, local media reported that the residents of the city of Douma in Eastern Ghouta have taken to the streets calling on the militants to join the ceasefire with the Syrian government, accusing the leaders of the Jaysh al-Islam group of risking the lives of thousands of civilians.

A week before the discovery, Syrian authorities have sent more than 100 letters to the UN Security Council confirming that terrorist groups own chemical substances that they use against civilians.