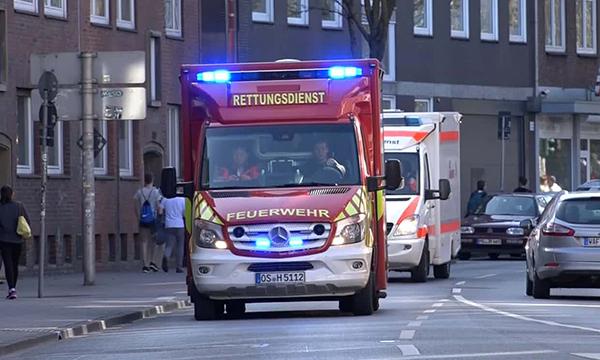 Driver also dead after shooting himself after incident in historic part of German city, which also left 20 people injured

Two people were killed and about 30 injured after a van drove into a crowd in the western German city of Münster. The driver of the vehicle, who had not yet been officially identified on Saturday night, also died after shooting himself at the scene. Authorities have said that there is no indication that it was an Islamist attack.

State interior minister Herbet Reuel said that investigators believe the perpetrator is a German citizen. Local media reported that he was someone with mental health problems. No one else was being sought in connection with the incident. The online edition of Der Spiegel magazine said that German authorities were “assuming” that the incident was an act of terrorism, although there was no immediate official confirmation of this.

Police urged people to avoid speculation and asked that they avoid the area near the Kiepenkerl pub where a large-scale police operation was underway. Kiepenkerl is a popular bar in the city’s historic centre. Earlier reports stated three people had been killed, but that was later revised down.

A vehicle, reportedly a grey VW van, was driven into a restaurant terrace area at 3pm on Saturday. Eyewitnesses said that it was driven at speed. Photographs of the aftermath showed tables and chairs strewn across the popular tourist square. An employee at one of the cafes told local media that she had heard a bang and people screaming.

“I’m angry – it’s cowardly to do something like this,” she told German television channel N24.

Daniel Kollenberg, who witnessed the aftermath, told the BBC: “I think it is a deliberate attack because it’s not allowed for cars to go in this area. People are calm, but really shocked.”

Ulrike Demmer, the federal ­government’s deputy spokesperson, said that the government’s thoughts were with the victims and their families.

Reuel criticised people for spreading misinformation online, claiming that a refugee was responsible.

The incident evoked memories of a December 2016 truck attack in Berlin that killed 12 people. Anis Amri, a failed Tunisian asylum seeker with Islamist links, hijacked a truck, killed the driver, and then went on to drive the truck into a crowded Berlin Christmas market, killing 11 people in the market and injuring 70 others.