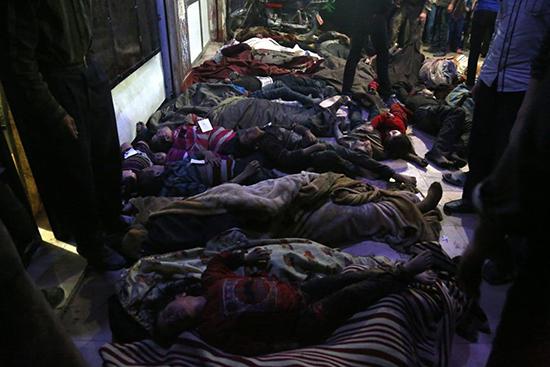 At least 40 people had been killed in Eastern Ghouta in an apparent chemical attack. Five hundred more had been brought to hospitals with “symptoms indicative of exposure to a chemical agent,” according to the Washington-based Syrian-American Medical Society.

Patients reportedly struggled to breathe, foamed at the mouth and emitted a “chlorine-like odor,” key symptoms experienced by those exposed to a nerve agent.

Officially, Syria has no chemical weapons. President Bashar al-Assad claims his forces destroyed their stockpile in 2014. On Sunday, state media denied government involvement in the attack, and Russia’s Foreign Ministry echoed that message.

But few believe it. This morning, President Trump took to Twitter, writing, “Many dead, including women and children, in mindless CHEMICAL attack in Syria.” He blamed Russian President Vladimir Putin, Russia and Iran for the attack, promising a “big price.” White House homeland security and counterterrorism adviser Thomas Bossert told my colleagues, “I wouldn’t take anything off the table.”

It’s unclear, however, what a U.S. response might look like. Here’s a look back at how Washington has responded to other alleged chemical attacks in Syria and what it tells us about how Trump might respond this time:

July 23, 2012: Syrian Foreign Ministry spokesman Jihad Makdissi confirms that Syria has chemical weapons, though he said these weapons would never be used against the Syrian people. A month later, President Barack Obama calls the use of chemical weapons a “red line” that would result in “enormous consequences.”

Dec. 3, 2012: Obama echoes his earlier warning, telling Assad: “The use of chemical weapons is and would be totally unacceptable, and if you make the tragic mistake of using these weapons there will be consequences, and you will be held accountable.”

March 19, 2013: A gas attack in northern Syria kills 26 people, including more than a dozen troops. Syrian government officials and rebel groups trade accusations; a U.N. investigation confirms that nerve gas was used but did not identify a culprit.

Aug. 21, 2013: A sarin attack in Eastern Ghouta kills more than 1,000 people. A U.N. investigation confirms that ground-to-ground missiles loaded with sarin were fired into the town as people slept. The United States says the Syrian government is to blame.

Aug. 31, 2013: Obama tries to persuade Congress to grant permission to carry out punitive strikes against the Syrian government but can’t secure enough votes. So, instead, he spearheads a U.N. Security Council order requiring Syria to destroy its chemical weapons stockpile. The Security Council warns it could use force in the event of noncompliance. Syria also signs on to the Chemical Weapons Convention, which prohibits countries from producing, stockpiling or using chemical weapons.

June 23, 2014: The Organization for the Prohibition of Chemical Weapons says it removed the last of Syria’s chemical weapons. It’s a hopeful moment, but just a few months later, the OPCW says chlorine was used as a weapon “systematically and repeatedly” on villages in northwestern Idlib province.

By 2015, chemical weapons inspectors are warning that they haven’t been given the access they need to say whether Assad’s government has fully dismantled its program. As Reuters put it:

Syrian authorities have hindered the work of inspectors and how the international community has failed to hold Syria to account, according to half a dozen interviews with officials, diplomats, and investigators involved in eliminating Syria’s weapons of mass destruction. A promise by Syria in 2013 to surrender its chemical weapons averted U.S. airstrikes. Many diplomats and weapons inspectors now believe that promise was a ruse.

Feb. 28, 2017: A Security Council resolution authorizing sanctions against Syria for the use of chemical weapons is vetoed by Russia and China.

April 4, 2017: Nearly 100 people are killed in the northern town of Khan Sheikhoun in an apparent sarin attack. Shortly after, Trump is briefed on the attack. In a statement that day, the White House press secretary says chemical attacks are “not something that any civilized nation should sit back and accept or tolerate.” The next day, Trump speaks of his horror at the images of “innocent children, innocent babies” choking on poison gas.

How will Trump respond this time? It’s hard to say.

In the past, he has suggested that Obama is to blame for Syria’s use of chemical weapons, because he wasn’t tough enough on Assad. But this latest attack suggests that a targeted strike isn’t enough to deter Assad, either.

Even so, Trump seems eager to get out of Syria as soon as possible, which may preclude more aggressive action. Two weeks ago, he said the United States would leave Syria “very soon.” After Pentagon officials pushed back, the White House released a statement suggesting that the military’s mission in Syria “to eradicate ISIS … is coming to a rapid end.” No timetable was offered, but news reports indicate Trump wants the 2,000 U.S. troops working in Syria out within six months.

Could this alleged chemical attack change his calculus? Might Trump authorize another limited strike, in an effort to appear tough on Assad? It is anyone’s guess.

One thing we can say for certain: Syria is far too complicated for any one action to have much of an effect.

Amanda Erickson writes about foreign affairs for The Washington Post. Previously, she worked as an editor for Outlook and PostEverything.