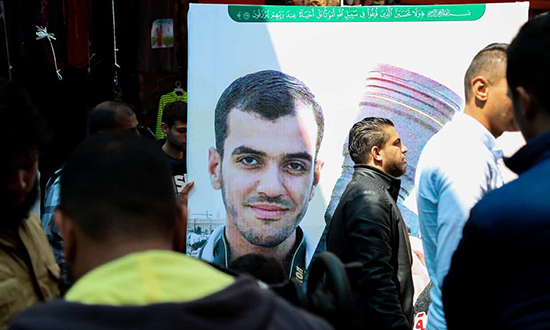 The drone floats above the farmland at the east of Gaza’s narrow coastal strip where beyond the fence – the transition is almost invisible – Israel’s border communities begin.

The video is among the last footage filmed by Palestinian photographer Yasser Murtaja in Gaza before he was shot dead by Israeli troops last Friday – and it eerily foreshadows his own fate.

Palestinian demonstrators walk through the flat fields, hold signs or sit in the shade of tents in the five border protest camps that dot the landscape from east of Jabaliya in the north to Khuza’a, a short drive from the southern city of Khan Yunis.

Murtaja died on the second of a series of mass Friday protests called the “Great March of Return”, which will culminate on “Nakba” Day (catastrophe in Arabic) on 15 May, which will commemorate the events of 1948 when, following the creation of the state of Israel, more than 700,000 Palestinians were expelled from their homes.

Despite wearing body armour clearly marked with a press sign, Murtaja was shot in the stomach while covering the protests and died later of his wounds. He was one of nine Palestinian men killed in a space of a few hours.

Murtaja’s video footage – provided to the Guardian by the Norwegian Refugee Council (NRC) – shows an injured man being rushed away on a stretcher. Burning tyres billow black smoke close to the fence. A zoomed shot shows a grainy image of Israeli soldiers, one raising his rifle.

Commenting on the killing of Murtaja, Israel’s defence minister Avigdor Lieberman suggested the journalist, a father of one, was responsible for his own death – despite the fact that Israel was warned that its shooting of civilians could amount to a war crime by the International Criminal Court.

“I don’t know who he is, a photographer, not a photographer. Whoever operates drones above [Israeli] soldiers needs to understand that he is endangering himself,” said Lieberman.

An Israeli military statement was more circumspect, announcing an investigation into his killing. “The IDF [Israeli Defence Forces] does not intentionally fire on journalists. The circumstances in which journalists were hit, allegedly by IDF fire, are unknown to us and are being examined.”

Commissioned by NRC to document the human suffering, Murtaja, a 30-year-old photographer well known for his drone footage, never got to complete his project.

“I talked to Yasser on Wednesday evening by phone, after he came back from the Access Restricted Zone in Gaza where Palestinians were demonstrating,” said NRC’s media adviser in the Middle East, Karl Schembri.

“We talked about the stories we wanted to cover – families affected by violence, as well as children again exposed to trauma and their ensuing nightmares.

“Two days later, he was killed by an Israeli sniper while peacefully observing the demonstrations. He was killed doing his job: recording his people’s right to protest for their human rights.”

Jan Egeland, NRC’s secretary-general, added: “Yasser Murtaja was a civilian and a journalist who was wearing clear press identification while he was filming the demonstrations at the Gaza fence with Israel. He was there because he wanted to document civilians exercising their right to peacefully protest.”

The stories that NRC and Murtaja were working on focus on the impact of persistent violenceon the mental health and wellbeing of children in Gaza.

One of the cases documented by NRC is that of 14-year-old Reham. She was attending the Return March in Gaza with her mother, father, sister and two brothers on 30 March when her father was shot in the leg. Reham’s father may now need to have his leg amputated.

“The ongoing and unjustifiable border closure and extreme economic deprivation of civilians in Gaza amounts to nothing short of collective punishment,” said Egeland.

“And now the indiscriminate shooting at peaceful protesters on their land – while running away, while waving flags, while praying, while reporting, while giving first aid and while working on their land – is abominable. This cannot be allowed to continue, and those responsible must be held to account.”