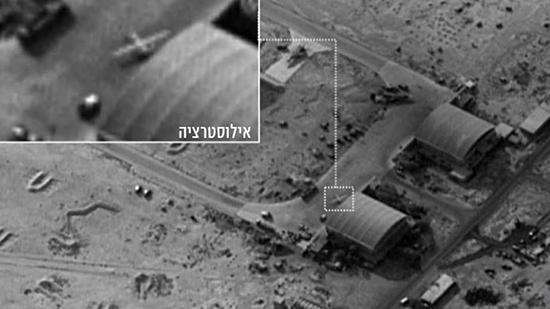 Spokesman says Israel did not inform Putin before carrying out overnight strike on Iranian T-4 air base ■ In the past, Israel complained about Obama officials leaking intel

WASHINGTON – Israel informed the United States of its plans to attack in Syria overnight, two U.S. officials told NBC News on Monday morning. The officials confirmed that it was the Israeli military that carried out the strike on an air base in Syria – something Israel has not officially acknowledged, as part of its policy of not directly taking responsibility for actions in the Syrian arena.

Under the Obama administration, Israel complained about a number of occasions in which U.S. officials leaked to news outlets that Israel was responsible for strikes in Syria. This time, however, Israel has already been publicly blamed for the attack by Russia, which has denounced the attack. Still, a confirmation from American officials about an action that Israel is not officially taking responsibility for is an unusual event in the relationship between the two countries.

Syria and its main ally Russia blamed Israel for carrying out an attack on a Syrian air base near Homs on Monday which killed 14 people. Syria’s state TV initially blamed the strike on the United States, but the Pentagon denied the U.S. carried out any strike in Syria. Rami Abdurrahman, who heads the Britain-based Syrian Observatory for Human Rights, says most of the 14 killed were either Iranians or members of Iran-backed groups.

Iran’s Fars news agency reported that four Iranians were killed in the air strike, which it attributed to Israel. Media outlets associated with the Iranian Revolutionary Guard Corps named the four dead, all members of the IRGC and including one with the rank of colonel.

A spokesman said Russian President Vladimir Putin wasn’t informed ahead of time of any upcoming airstrike on a Syrian air base. Dmitry Peskov, spokesman for Putin, told reporters on Monday that Israel had not spoken to the president ahead of the air strike even though there may have been Russian military advisers at the base, which he described as “a cause for concern for us.”

The Russian military said that two Israeli F-15 war planes carried out the airstrikes on the T-4 miltiary base near Homs, the Interfax news agency reported. Activists said that 14 people were killed in the strike, including Iranians.

Interfax cited the Russian Defense Ministry as saying that Israeli war planes had carried out the strikes from Lebanese air space.

The Lebanese army said in a statement Monday that four Israeli planes violated Lebanon’s airspace for about 10 minutes around 3:25 AM. The army did not say whether the warplanes carried out the airstrikes on Syria’s T-4 air base.

The Russian ministry said that Syrian air defense systems had shot down five of eight missiles fired, while the other three landed in the western part of the base. Russian Foreign Minister Sergei Lavrov said Monday that the strike was “a dangerous development.”