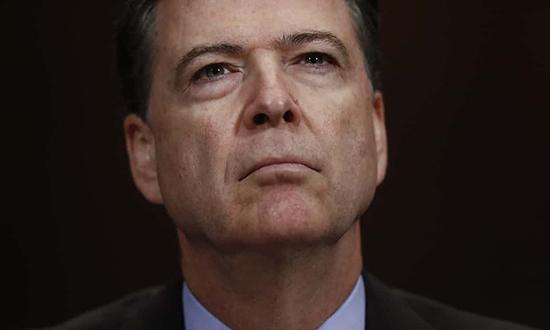 At 6ft 8in tall, James Comey is hard to miss. But two days after the inauguration of Donald Trump, Comey, then director of the Federal Bureau of Investigation, tried to hide from the president at a White House reception, by standing in front of blue drapery that matched his blazer, he later told a friend.

Comey was anxious not to appear chummy with Trump as accusations rippled that he had handed the Republican the election by keeping Hillary Clinton’s email habits in the public eye, he explained.

Inspired as it was, however, the camouflaging tactic failed. Trump spotted Comey, opened his arms, called him across the room, grabbed his hand, pulled him in for an awkward hug and, according to Comey, whispered in his ear: “I really look forward to working with you.”

Less than four months later, Trump fired him. And now, Comey is about to step out from the curtains for good, with the release of a memoir that seems destined to set up a dramatic and very public clash with the president, and trigger another cycle of alarm and discomfort in the United States over the direction of Trump’s leadership.

Comey’s book, A Higher Loyalty: Truth, Lies and Leadership, which promises “never-before-told experiences from some of the highest-stakes situations of his career”, has already demonstrated huge popular appeal, shooting to the top of Amazon’s bestseller list in the weeks before its publication on 17 April.

Tickets to a Comey appearance in New York City later this month are being offered online for as much as $1,000, rivalling resale prices for the best-selling show five streets north, Springsteen on Broadway, and the first bookstore he will visit has hatched a wristband scheme to deal with the anticipated crowds.

Comey has done his part to stoke interest by framing the book as a showdown with Trump, whose presidency appears more at risk every day of being swallowed by the investigation led by special counsel Robert Mueller into alleged collusion between the Trump campaign and Russia.

“Mr President, the American people will hear my story very soon,” Comey tweeted in March. “And they can judge for themselves who is honorable and who is not.”

Given all this intrigue, A Higher Loyalty could land with an even greater splash than the previous insider account to spill from the Trump White House, journalist Michael Wolff’s controversial Fire and Fury.

But as Comey prepares to embark on a coast-to-coast book tour, he also risks playing into the hands of critics, some of whom discern in his painstakingly upright posture an untoward love of the spotlight, and who warn that his joining in a mudslinging match with Trump could further politicize the FBI, whose independence he has vowed to defend.

“I think he has to be careful,” said Julian Zelizer, a professor of history at Princeton University specializing in American politics. “For him, and for the publicity of the book, obviously all that attention is terrific. But I do think he has to be careful, because it’s not hard to imagine how President Trump will caricature that, if Comey’s out there selling really expensive tickets for people to see him on kind of a celebrity interview book tour.”

Many people connected with the FBI, whose reputation Trump has attacked as “worst in History!”, are rooting for the former director, said Asha Rangappa, a former FBI special agent and a lecturer at Yale University.

“I think that people took it very hard when he left, and to the extent that he is a voice speaking on behalf of the bureau – I do think that that is a function of the book, and I do think that most agents will be grateful for that, because they can’t comment, they can’t fight back when the president is slamming them,” Rangappa said. There were exceptions, though, she said.

For every two people with their hopes riding on Comey, it seems one skeptic can be found.

Trump may have branded Comey a “showboat” and a “grandstander”, in a preview of attacks sure to come, but Comey has been just as unpopular with supporters of Hillary Clinton, many of whom are convinced his interventions in the closing stages of the last election helped cost her the White House.

The former Democratic candidate herself told an interviewer last year that Comey had “forever changed history” with his public statements about the investigation into her use of a private email server.

“He can’t undo what he did,” said former Clinton adviser Philippe Reines, who among other things played Trump in debate practice against Clinton during the campaign. “You can’t be a savior when you’re undoing your own mess. It’s like giving a fireman a medal for his work as an arsonist.”

The Clinton camp points to a surprise news conference in July 2016, in which Comey announced there was no case to prosecute Clinton but branded her email habits “extremely careless”. Then, 10 days before the election, Comey sent a letter to Congress announcing that the FBI was investigating newly discovered Clinton emails, which he followed with a letter two days before the vote saying the investigation was done and “we have not changed our conclusions”.

Comey’s role in the election brought multiple criticisms from Reines. “One, more than anything, I think he’s naive,” he said. “Two, I think he’s sanctimonious. And three, he’s very self-involved. And let me unpack those.” The conversation went on at greater length than can be quoted here.

Comey’s defenders reply that in the tense climate of the presidential campaign, with partisan hackles high on both sides, the FBI director would have risked much more dangerous and conspiratorial charges of politicizing the bureau’s diligent work had he not gone public with its findings. Comey encountered a hard choice with terrible timing, and he acted in accordance with his lifelong record as a dedicated public servant, they say.

For many Americans, indeed, Comey looks too much like the man of the hour to dwell on the question of how, exactly, it got so late. If the United States yearns for deliverance from Trump, no one, apart from Mueller himself, may be so well positioned to strike the crucial blow.

Comey is a Republican, a former George W Bush appointee, a lifelong civil servant, a distinguished prosecutor, a foster parent and a sometime Sunday school teacher.

If he is an unusually credible figure, he was also unusually present at key scenes whose retelling could focus the national attention on the competence and character of the president.

Those scenes include a meeting in which Trump reportedly asked Comey to “let go” of an investigation into the former national security adviser Michael Flynn, and an awkward private dinner at which Trump told Comey, “I need loyalty, I expect loyalty.”

“The president begins by wanting to talk about my job and so I’m sitting there thinking wait a minute, three times we’ve already, you’ve already asked me to stay or talked about me staying,” Comey said, describing the dinner in testimony before Congress last year. “My common sense, again I could be wrong but my common sense told me what’s going on here is, he’s looking to get something in exchange for granting my request to stay in the job.”

What you need to know about the Trump-Russia inquiry

Trump has disputed Comey’s version of events, which the lifelong prosecutor took care to record in writing immediately afterward. “I was honestly concerned he might lie about the nature of our meeting so I thought it important to document,” Comey testified.

Even critics such as Reines say they don’t doubt the veracity of the story he has to tell.

“I don’t impugn his motivations for being in public service,” Reines said. “I don’t think he’s an evil person. But it’s almost worse that he’s not an evil person. Because if he were evil and this was his plan, at least he could say he’s an effective evil person.”

Unlike most elected officials, Comey has enemies and friends on both sides of the political divide, potentially enabling him to speak for example to Trump supporters who otherwise will brook no criticism of the president. In his book, he appears to have found a powerful platform to do so.

“Books, publishing, television – that’s where a lot of politicians or ex-political figures make their point known,” said Zelizer. “Congressional hearings don’t equal a big book in this day and age.

“More people will pay attention to this than when he testified. And if the book does well, it will continue for a long time.”

5 July 2016 Comey calls a surprise news conference to announce that an FBI investigation had determined that Hillary Clinton and colleagues “were extremely careless in their handling of very sensitive, highly classified information” but “we cannot find a case that would support bringing criminal charges on these facts”.

28 October 2016 Comey writes a letter to eight Republican members of Congress, immediately leaked, saying that the FBI has “learned of the existence of emails” relating to Clinton that it will investigate.

6 November 2016 Comey writes another letter saying the investigation is complete and “we have not changed our conclusions”.

3 May 2017 Testifying before Congress, Comey says, “It makes me mildly nauseous to think that we might have had some impact on the election.”

8 June 2017 Comey testifies before the Senate about the circumstances of his firing, blasting the Trump administration for “defaming” him and attacking the FBI. “Those were lies, plain and simple,” he said.