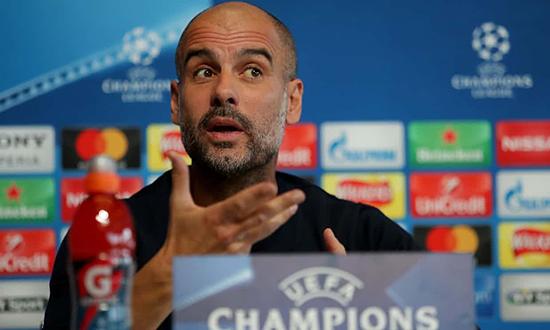 Pep Guardiola has challenged his Manchester City side to play “the perfect game” to defeat Liverpool in the Champions League quarter‑final second leg at the Etihad Stadium on Tuesday night.

City trail Jürgen Klopp’s side 3-0 and they followed defeat in the first match at Anfield last Wednesday by losing at home against Manchester United 3-2 on Saturday, after surrendering a two-goal lead and missing the chance to clinch the Premier League title.

Guardiola is conscious that his players may be affected mentally by these reverses and, while striking a positive note by saying his side can use the challenge as inspiration, he understands how difficult the task is.

“Of course to go through you have to make the perfect game, create chances, be clinical and concede few chances,” he said. “All the conditions have to be perfect. The aim is tough but we have 90 minutes and in football everything can happen.

“What we are going to do is try. We have to score the first one, then make the second one. The perfect scenario is to go through. At the end we cannot forget that it is a simple game [of football] and focus on every single minute. If we concede, don’t give up – it’s more than 90 minutes [with added time]. Many times we have created a lot of chances in a short period. We have to be clinical and if we are not then move on to the next [chance].”

If Liverpool score once City would need five goals to progress to the semi-finals because of the away-goal rule but Guardiola believes that the dream of giving City a historic night in the competition and elevating the club’s standing can inspire his players.

“We need titles in Europe – it’s complicated [to achieve] but you need nights that make you understand it. Beating Barça [3-1, last season] was so special because we know they’re the best team in the world.”

City can win the Champions League in the near future, he said. “It will happen sooner or later – what this club has done in the last 10 years in terms of creating facilities and making it bigger means it will happen. Hopefully we can do it. Maybe it is next year but soon it will happen.

“To reach the semi-final would be for the second time in our beautiful history. I don’t have to talk about how beautiful it is. They show every single game what they [my side] want to do. I know you judge results, but performance? My team is extraordinary. Exceptional. It is a joy to be manager of the team, I am so delighted.”

Guardiola is confident City can match anyone in Europe but is unsure if they are ready to claim the Champions League this season. “This team is ready to fight with all the teams but the other teams are so good, it is difficult – a mountain – but we can compete, especially at home. For the next step maybe we need more time. Next season we will be better.”

Regarding the potential mental damage done by back-to-back defeats, Guardiola said: “I don’t know but if we are not able to do it, it will be a good lesson for the future. A good test. Football is a challenge like life. We are happy to handle it. We have 90 minutes plus extra time and what we’ve shown this year – even in the last game we created a lot of chances in a few minutes and the opponents know that.”

The referee will be Antonio Mateu Lahoz, who Guardiola criticised recently, saying: “I remember what happened last year. It was 1-1 at home to Monaco when there was a clear penalty on [Sergio] Agüero and what should have been a red card, but the Spanish referee didn’t call it. We went from a possible 2-1 lead to 2-1 deficit. These types of situations are very important.”

Lahoz has twice before officiated at the Etihad, awarding two penalties to Napoli in October’s group game, and one to Monaco in that home leg.

Manchester City are confident that Liverpool’s team coach will arrive safely at the Etihad Stadium, and not be attacked as theirs was at Anfield before the Champions League quarter-final first leg last week.

City host Jürgen Klopp’s side in the return leg on Tuesday night hoping to overturn a 3-0 deficit. Missiles were thrown at at City’s bus last week, with the damage bad enough to remove the vehicle from commission for the trip home. Yet City do not believe Liverpool’s coach will be in similar danger on Tuesday as it will enter the service tunnel under the Etihad Stadium and go into an underground car park.

There will, though, be an increased security presence. Chief Inspector Dean Howard, Greater Manchester Police’s match commander, said: “We will have an increased number of officers around the stadium as well as in the city. As with all high-profile games such as this, we have also carried out intelligence gathering beforehand and will continue to work with both clubs and supporter groups to ensure all fans can enjoy the match in a competitive but safe environment.”

City’s manager, Pep Guardiola is also not concerned: “Since I am here it has never happened in this stadium,” he said. “Opponents arrive in the right way [so] it’s not going to happen. The police know what they have to do.” Jamie Jackson