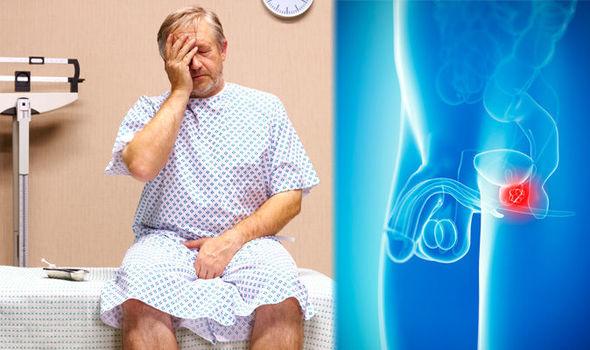 DEATHS from prostate cancer overtook female deaths from breast cancer earlier this year, but many prostate cancers are still being diagnosed late. Here’s what to look out for.

Prostate cancer is the most common cancer in men in the UK, and recent figures showed the number of men dying from prostate cancer had overtaken female deaths from breast cancer for the first time.

But a cancer charity has warned nearly four out of 10 cases of prostate cancer were being diagnosed late.

A report from charity Orchid showed a “worrying trend” of late diagnoses in the UK.

It found that 42 percent of prostate cancer patients saw their GP with symptoms at least twice before they were referred to a specialist, with six percent being seen five or more times before a referral was given.

It also found that 23 percent of all cancer cases were diagnosed at A&E, with the majority of those at an advanced stage.

Orchid chief executive Rebecca Porta said: “With prostate cancer due to be the most prevalent cancer in the UK within the next 12 years, we are facing a potential crisis in terms of diagnostics, treatment and patient care.

“Urgent action needs to be taken now if we are to be in a position to deliver world class outcomes for prostate cancer patients and their families in the future.”

Variations in the level of care across the country have been blamed for late diagnoses. Prof Frank Chinegwundoh, a urological surgeon at Bart’s Health NHS Trust said: “25 percent of prostate cancer cases in the UK are diagnosed at an advanced stage.

“This compares to just eight percent in the US where there is greater public awareness of prostate cancer and greater screening.”

The cancer usually doesn’t cause any symptoms until the tumour has grown large enough to put pressure on the urethra.

The NHS lists symptoms as needing to urinate more frequently, often during the night, and a weak flow.

Difficulty in starting to pee and straining or taking a long time while urinating are also symptoms, as is the feeling that your bladder has not emptied fully.

Once the cancer has spread, symptoms can include pain in your bones and your back, a loss of appetite, pain in the testicles and unexplained weight loss.

The cancer is diagnosed using the prostate specific antigen (PSA) test, which is available free to any man over 50 who requests it.

But the test does have some risks, warned Dr Sam Rodgers of Medichecks. “Modern prostate biopsies involve taking anywhere from 10 to 50 biopsies of the prostate depending upon the method used. These can cause pain, bleeding, infection, and may cause sexual problems in a small number of men.”

The test has also been criticised for failing to pick up some cancerous tumours. “It will miss some cancers, and often those cancers that are picked up when using the PSA test are not harmful,” explained Prof Anne Mackie of the UK National Screening Committee.

She added a lot of research is being done into the screening process, and they are keeping a close eye on the evidence as it develops.

The NHS notes that men with prostate cancer can live for decades without symptoms, or any need of treatment, because the disease often progresses very slowly.

Regular sex is thought to lower the risk of prostate cancer. Men who ejaculated frequently [at least 21 times a month] were less likely to get prostate cancer, according to WebMD.