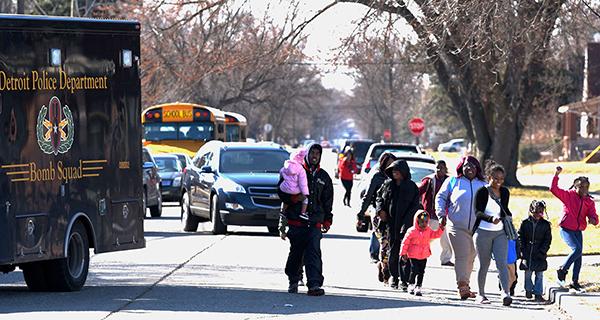 About half of the threats made in the days since the Parkland shooting have come from online, based on one estimate. Educators and law enforcement are faced with balancing school safety and justice – including First Amendment rights – when they investigate.

APRIL 6, 2018 —The Snapchat post showed several guns and warned @MHS students not to go to school the next day. It spread so quickly in January that it sparked investigations in at least 30 states at schools that share those initials, until police in Virginia arrested a juvenile and declared it a hoax.

Since the February shooting in Parkland, Fla., school districts have faced a predictable spike in such threats. Some real plans to do harm have been thwarted as alert students, parents, and citizens speak up. In many more cases, threats have not been genuine. But no one wants to miss warning signs that could prevent the next school shooting.

Increasingly, those “signs” are coming through young people’s communications via social media – a realm where it can be particularly difficult to tell the difference between a real threat, a hoax, and a comment that would be constitutionally protected, such as a joke or satire.

It’s making for a lot of sleepless nights for school officials and law enforcement as they try to balance school safety and justice.

“School shootings are a needle-in-a-haystack problem…. The challenge of looking for a needle in a haystack is that you mistakenly pull out a lot of hay,” says Mark Dredze, a computer science professor at Johns Hopkins University in Baltimore, Md., and one of the authors of a briefing on preventing youth violence by the American Psychological Association in 2016.

“We need to carefully consider the implications of wrongly suspecting someone of violent intent,” he adds.

Society wants to send a strong message to young people to deter hoaxes that can cause expensive disruptions. On the other hand, if adults misinterpret statements, and punishments go overboard, they risk alienating the very students they rely on to report truly worrisome messages from their peers.

For at least a small subset of innocent students, there’s also the risk of permanent disciplinary records or criminal justice involvement – which can have serious implications for their education and mental health.

Banned from Internet before trial

Mr. Carter faced felony charges of making a terroristic threat in Texas in 2013, and he was expecting to go to trial next month. The charges, stemming from a Facebook post mentioning shooting up a kindergarten, carried up to 10 years in prison.

The comment was taken out of context – a hyperbolic back and forth with a fellow gamer who had suggested Carter had mental problems, says Carter’s attorney, Don Flanary of San Antonio. It also did not name any particular school or otherwise indicate a plan, he says.

Carter, 18 at the time of the post, was assaulted in jail and faced extremely high bail, $500,000, which kept him there for months, Mr. Flanary says. For five years, while pre-trial challenges went through appeals, Carter had no access to the internet.

On March 28, he pleaded guilty to a misdemeanor charge of making a false report and received time already served.

“In this day and age, threats to shoot up schools and harm children simply cannot be tolerated,” Comal County Criminal District Attorney Jennifer Tharp told the Express-News. Ms. Tharp did not respond to the Monitor’s requests for comment.

The plea suggests the prosecutor didn’t have evidence to prove the more serious charges, and that if the teen needed to learn a lesson, he probably learned it five years ago, says Carlos Monagas, managing deputy district attorney in Riverside County, Calif., who co-authored a law review article on social media threats in 2016.

School threats are serious, but the First Amendment is meant to protect people like Carter from being punished severely for speech that isn’t intending to threaten, Flanary says. “We could say … here’s a list of things you can’t talk about in our country; don’t even joke about it…. But that’s not how we chose to create our democracy…. The First Amendment creates a lot of mess in society, but the pros outweigh the cons.”

He acknowledges, though, that in this day and age, people need to be mindful that even flippant statements about shooting up a school might cause concern. The misdemeanor charge can cover something that triggers emergency response even if not intended to. “It’s a better fit with his acts, and allows him to be done with this,” Flanary says.

The problem from the law enforcement side is that the legal lines are still somewhat blurry when it comes to social media threats and the First Amendment.

Some prosecutors and state lawmakers have been calling for better laws to catch up.

“Threats that a young person would probably never deliver in person, they somehow feel OK delivering online … but the recipient doesn’t have the social cue to let them know this is a really bad joke,” Mr. Monagas says.

California and many other states need “a law that is more specific to school threats but that also lowers the bar of proof somewhat, so we can capture threats that are targeted at specific campuses,” he says. Then the system could intervene, “not to destroy the life of the young person, but to in fact help to educate and turn that young life around.”

There’s no national tracking of threats against schools, but the nonprofit Educator’s School Safety Network saw an average of 70 threats or incidents of violence per day in media reports in the weeks after the Parkland shooting. That’s up from about 10 per day last fall. By late March the number had tapered off to about 40 a day, says Amanda Klinger, director of operations for the network, based in Genoa, Ohio.

Ms. Klinger says about half of those threats have been coming through social media.

At least eight states have laws specifically addressing threats against schools, with several more considering them, Sarah Pompelia, a researcher at the Education Commission of the States, told the Monitor in an email.

Some communities aren’t waiting. Orlando, Fla., fast-tracked a misdemeanor category for school threats, to close a loophole that police said made it too difficult to make arrests. At least one commissioner cautioned against overreacting, noting that mental health supports should also be addressed, the Orlando Sentinel reports.

Cases like Carter’s were on the minds of First Amendment defenders who sent briefs to the US Supreme Court when it considered Elonis v. United States in 2015. The Elonis case involved alleged threats made via social media in forms such as rap lyrics. They targeted an individual, not a school.

Many in the legal community hoped the ruling would broadly address “the First Amendment status of threat speech in the unique social media context,” says Frank LoMonte, director of the Brechner Center for Freedom of Information at the University of Florida in Gainesville.

But instead, the narrow ruling left a lot of uncertainty.

When it’s a matter of school discipline, rather than criminal charges, “the courts have been much more forgiving in allowing punishment for speech on social media,” Professor LoMonte says.

While police and prosecutors have an important role, some educators and school safety experts say promoting safety is first and foremost an educational issue.

Too often, dollars go to hardware such as security cameras instead of to training for educators and administrators to serve on threat assessment teams and handle crisis communications, says Ken Trump, president of National School Safety and Security Services in Cleveland, Ohio.

Prosecution of disruptive threats can be a good deterrent, but people also need to ensure that students don’t worry that the law is going crack down too hard on their peers, since “most of the best tips right now … are coming from students,” says Ron Stephens, executive director of the National School Safety Center in Westlake Village, Calif.

“We’re always good about saying ‘Oh, let’s pass 15 more laws.’ Maybe what we need to do is create a much better spirit of cooperation,” Mr. Stephens says. “Some of the schools that have done the best job of reducing school crime and creating that safe haven of an environment, they find that school children tend to share more of their concerns.”