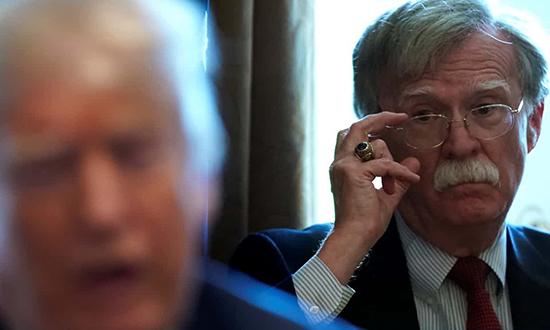 As one of the hawks who led the Bush administration into war in Iraq and Afghanistan, Bolton is unlikely to urge restraint on the president

As Donald Trump warned on Monday of an imminent US military response to chemical weapons use in Syria, the new head of his national security team was sitting directly behind him, his bristling white moustache a reminder of earlier American wars.

John Bolton was one of a handful of hawks who led the Bush administration’s charge into Afghanistan and Iraq, conflicts that are still going on as Bolton returns to centre stage, after a decade in the political wilderness. His first day at work as Trump’s national security adviser focused on a new front, and the question of how to punish the Syrian regime and its backers for the alleged use of poison gas against a rebel-held enclave in the eastern Damascus suburbs.

Bolton has been a consistent advocate of the use of US military might throughout his career as lawyer turned foreign policy activist, and his presence at Trump’s side is widely expected to echo Trump’s instincts, demonstrated in April last year, to respond with airstrikes to a mass-casualty use of chemical weapons.

“Bolton certainly doesn’t shy away from the use of military force,” said Julianne Smith, a senior member of the Obama national security council and now director of the transatlantic security programme at the Centre for a New American Security.

“The question is how much does he want to push the president down a path where you are going to get into an escalatory tit-for-tat with Syria, Russia and Iran.

“He is going to have to balance his own instincts with a president who wants to show there will be a response to the use of chemical weapons but doesn’t want a 10-year commitment in Syria. And neither he nor Trump have a political plan on what to do about Syria.”

Beyond the immediate decision on Syria, there is even greater uncertainty and apprehension about Bolton’s influence on policy towards North Korea and Iran, where Bolton has been a staunch opponent of diplomatic compromise.

He has called for the US to walk out of a 2015 nuclear agreement with Iran, something Trump is threatening to do next month anyway. And he has insisted that the president should demand North Korea’s immediate and complete dismantling of its nuclear programme when Trump meets the country’s leader, Kim Jong-un, at a summit due to take place in May but which the US president said on Monday could be pushed back to early June.

On North Korea, Bolton’s instincts have been more hawkish than Trump, who has intermittently signaled he would be ready for some form of compromise. James Carafano, a vice-president at the Heritage Foundation, said Bolton would not make the mistake of his predecessor, HR McMaster, in diverging from the president’s approach.

“There is a difference between John Bolton the TV pundit and John Bolton in government,” Carafano said, before referring to the character of a mafia enforcer in The Godfather. “When he is in government, he is Luca Brasi, executing the administration’s policies.”

The national security adviser has historically acted as a moderator of conflicting views and interests within an administration. But Thomas Countryman, a former senior state department official, said Bolton’s record in the Bush administration raised questions of how well suited he was temperamentally to that role.

“He is known as someone who doesn’t tolerate dissenting views well,” said Countryman, now chairman of the Arms Control Association, adding that Bolton’s time at the state department left behind a trail of poor morale. “He retaliated against analysts who didn’t agree with him on Cuba and Iran, and was known as an abusive manager.”

According to attendees at an evening event last week that was attended by much of Washington’s foreign policy elite, McMaster approached several people asking if they could provide jobs for some of his top staffers, who were apprehensive about serving under Bolton.