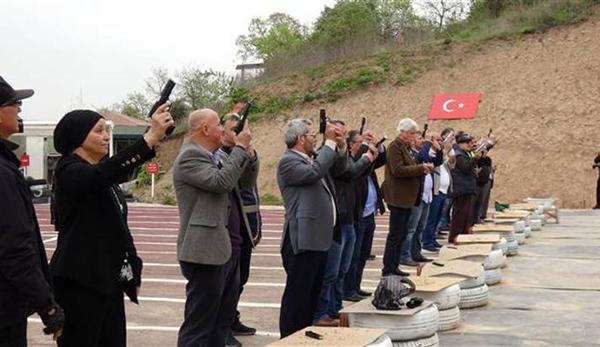 A group of neighborhood heads (muhtars) have been given firearms training with Kalashnikovs and handguns at a shooting range in the northwestern province of Bursa.

Around 30 Bursa muhtars came together with Bursa Police Chief Osman Ak at the shooting range of the Police Special Operations Department on April 7. The event was part of “Police Week,” which is marked between April 1 and 10 every year in Turkey.

Following brief training given by Ak and trainers at the department, the muhtars shot at target boards using their own handguns or Kalashnikovs provided at the police department. During their shooting, the muhtars had their photos taken and video footage was recorded.

April 10 is marked every year as “Police Day” in Turkey, and between April 1 and 10 various activities are held throughout the country to promote the police’s work and “bring the police organization together with civilians.”