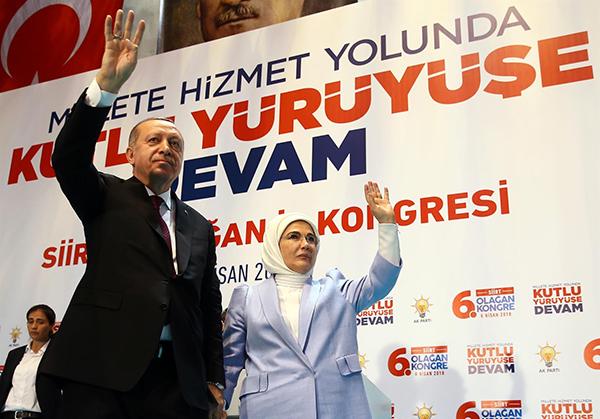 President Recep Tayyip Erdoğan once again struck a harsh tone against supporters of the outlawed Kurdistan Workers’ Party (PKK) on April 8, saying supporters of the group will “end up in hell” and vowing to continue operations in Syria and Iraq.

“We will continue our struggle within the framework of a strategy that we have determined. We thank every party that support us in this struggle. To those who speak like mouthpieces of terrorist organizations, we say you will end up in hell,” Erdoğan said at a ruling Justice and Development Party (AKP) rally in the southeastern province of Siirt.

His comments came a day after he accused France of abetting terrorists by “hosting them” at the Elysée Palace in Paris, amid a diplomatic row between the NATO allies over France’s support for the Syrian Democratic Forces (SDF).

Ankara deems the YPG to be directly affiliated with the PKK, and launched a military operation against Syrian Kurdish forces in the northeastern province of Afrin under “Operation Olive Branch.”

Turkey said Macron’s pledge amounted to “support for terrorism” and could make France a “target of Turkey.”

“France, you are abetting terrorism. You are supporting it by hosting them at the Elysée Palace,” Erdoğan told supporters in the southwestern province of Denizli on April 7.

Erdoğan further ramped up his tone on April 8, accusing France of “hosting terrorists.”

“We have been waging an unprecedented struggle against terror. They are standing against us with the voice and demands of terrorist organizations even though they should have been supporting us,” he said.

He vowed that Turkey will continue its operations in Syria and Iraq against PKK forces, adding that the Turkish Armed Forces have so far “neutralized” a total of 4,017 militants within the framework of “Operation Olive Branch.”

Erdoğan noted that in recent operations in Iraq’s Zakho and Dohuk, 327 militants were “neutralized,” while the number in operations within Turkey is 154.

“What did we say? No matter where you [PKK] escape, we will be there,” he said.

The Turkish authorities often use the word “neutralized” in their statements to imply that the militants in question either surrendered or were killed or captured.