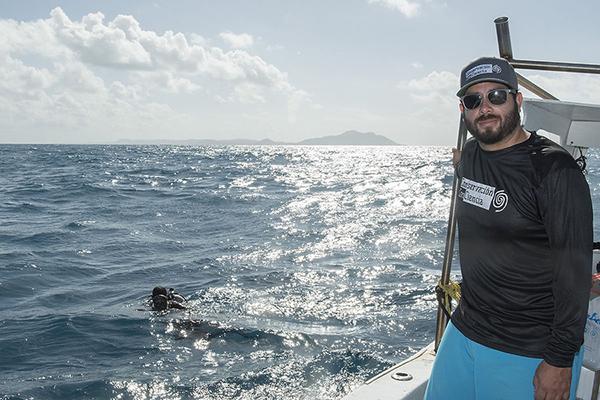 Hurricane Maria upended Puerto Rico, along with its fishing industry. Raimundo Espinoza Chirinos’s project cleans up the storm’s hidden damage on the ocean floor by tapping into local fishermen’s skills.

APRIL 9, 2018  NAGUABO, PUERTO RICO—Raimundo Espinoza Chirinos leans over the side of a fishing boat and points at a dark blur rising up slowly beneath the choppy water. “Here he comes. He’s got something,” Mr. Espinoza says, as fisherman Julio Ortiz breaks the surface of the water. Mr. Ortiz, wearing a short-sleeved wet suit and small circular mask, treads water as he heaves up a contraption made of red plastic milk crates fastened together with rope.

It’s a fish trap – an illegal one, given that it’s made of plastic – that was lost when hurricane Maria tore across Puerto Rico last year. The estimated hundreds of traps that were swept out to sea in September are not only capturing and killing lobster and fish but also potentially seeping chemicals into water and the seafood people eat.

“There are no markings on the surface [for these lost traps], which means only someone under the water every day is likely to find them,” says Espinoza, founder of Conservación ConCiencia, a nonprofit supported by The Ocean Foundation that works on sustainable fisheries and climate resilience here.

When hurricane Maria crashed into Puerto Rico the morning of Sept. 20, 2017, the entire population suffered. Six months later, tens of thousands of families are still without electricity, and evidence of the homes and livelihoods swept away by the rain and ferocious winds litters communities – and the ocean floor.

Espinoza launched Conservación ConCiencia in 2016, first leading a trip to Cuba for Puerto Rican fishermen to focus on conservation and fishing practices, and later starting Puerto Rico’s first shark research and conservation program. But in the aftermath of the storm, he realized he needed to change gears.

“Everyone kept asking, ‘How’s the ocean? What’s the damage?’ ” Espinoza recalls. “And it became clear that no one knew. Everything was in crisis [on the island], and no one was looking” at the fisheries.

He received funding from a Puerto Rican organization to help replace lost fishing gear, although only items that are considered sustainable and safe for local fisheries. He also teamed up with the National Fish and Wildlife Foundation to launch an emergency relief project. That’s what he is doing out on the water today with Ortiz, the fisherman.

The project taps into the skill sets of fishermen here and offers added benefits such as economic support and the building of relationships between fishermen, scientists, and government officials. Its premise is simple: When fishermen go out diving for lobster and conch, a common practice here, and see a trap on the ocean floor or in a coral reef, they take note of the GPS location and send it to Espinoza. He then returns with them, documents the removal, and pays them for their time.

It’s a unique project and could set an example for future coastal disasters around the world.

Ortiz and his two sons, Jonathan and Orlando Ortiz Pobon, are all working together on today’s cleanup mission.

They were skeptical when they first heard that someone was offering money to help remove lost traps after the storm. Maybe they’d drive a scientist or official around, but surely they wouldn’t be paid, Ortiz recalls thinking.

Soon after Maria, Espinoza started showing up in fishing ports like Naguabo, bringing food and water from San Juan, the island’s capital. “This was some of the first aid we saw,” says Ortiz, referring to the weeks following the storm. His home in nearby Punta Santiago flooded. The top floor of a neighbor’s home was washed away. The storage lockers on the dock in Naguabo, like those in other fishing towns across Puerto Rico, were washed out to sea, taking with them the fishing gear – and work – of many families here.

Espinoza began meeting fishermen and telling them about his project. Today he’s working with about 25 individuals in five communities.

“We need to change the system that’s always asking favors of fishermen but doesn’t treat them as a valuable resource,” Espinoza says as he adjusts an action camera on Jonathan’s wrist. Jonathan tips backward into the water to look for traps with his father.

The camera is a small but key step in the project. It documents the ocean floor, creating a record of sea-grass growth, coral reefs, and other aspects of the fisheries’ health post-Maria. It also records the process the fishermen use to remove the traps and can be used as a teaching tool for other fishermen joining the project.

Espinoza reports that he and his collaborators removed 155 lost traps from the ocean floor between Jan. 29 and March 13. The fishermen are paid $100 per trap, which comes out to roughly $500 per trip. Today, Ortiz and his sons recovered 10 traps from a small underwater cave about 55 feet beneath the water’s surface.

It’s a vital economic boost at a moment when gear is damaged and the ecosystem is in flux. Ortiz says he earned between $150 and $180 per day fishing before Maria, and that since the storm, key species like conch aren’t where they used to be.

But it’s more than money that motivates the men to participate. “A clean ocean is important for the future of our work and for the health of our fish,” Ortiz says.

“I found 60 lobsters in a [lost] trap,” Jonathan adds. “They were all basically dead. Wasted,” he says.

Earlier that morning, he had surfaced from the water to ask Espinoza to pass him a hammer. He dived back down to whack on a trap wedged in the rocks below.

Hailing from a landlocked city

The water is choppy, and Espinoza mentions he’s feeling a little queasy. Despite his dedication to the sea, this wasn’t the environment he grew up in. Born and raised in the landlocked Andean city of Quito, Ecuador, he became fascinated with marine life following a family trip to the Galápagos Islands when he was in fifth grade.

He went on to earn degrees in environmental studies and sustainable development and conservation biology in the United States, eventually moving to Puerto Rico, where his father had moved for work.

It was during a semester researching sea turtles in Baja California, Mexico, when he realized the importance of social connections in conservation efforts. Outside of his fieldwork, he tutored local children in English, with a focus on vocabulary about the environment. After he talked about protecting endangered sea turtles one day, one of his students told him excitedly that his uncle had given him one for his birthday. Espinoza thought the child was confused: Sea turtles are protected. He probably meant a snapping turtle.

But sure enough, several weeks later the student came in with his sea turtle – and his extended family.

“Just the connections we made talking about sea turtles and their importance in a basic English class led to its release,” Espinoza says.

“It made me realize the strong ties between our ecosystem and community involvement,” he says. “It can’t just be scientists talking about conservation; locals need to be invested, too.”

His project working with fishermen after Maria is true to that philosophy. And it’s gone beyond fishing communities helping him efficiently clean polluting debris from the ocean. They’ve also opened a window into the realities of fishing in Puerto Rico, realities that even government agencies tasked with overseeing the practice weren’t aware of.

Espinoza estimates that some 95 percent of the traps they’ve uncovered are illegal.

“We knew people used illegal traps, but we didn’t know the extent of it, and it’s quite big,” says Ricardo López, director of commercial fisheries at Puerto Rico’s Department of Natural and Environmental Resources. “I think this project … will not only help clean the waters but better integrate fishermen” into formal environmental protection efforts, he says. It could inform future oversight efforts as well.

After about an hour of diving, the back half of the boat is packed with rectangular plastic traps in red, yellow, black, and white.

“We need to work directly with the fishermen to transition into legal gear,” Espinoza says. “They have a vast knowledge of the water here. Together, I’m confident we’ll see change.”

How to take action

UniversalGiving helps people give to and volunteer for top-performing charitable organizations around the world. All the projects are vetted by UniversalGiving; 100 percent of each donation goes directly to the listed cause. Below are links to three groups whose efforts dovetail with the issues discussed in the accompanying story: