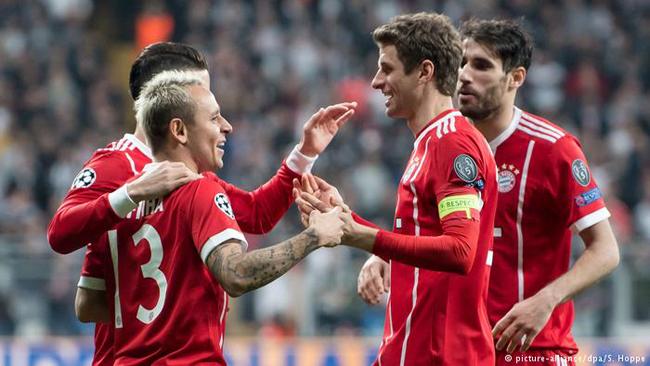 Bayern Munich won another title, but the real drama came at the other end of the table. There were missed chances and some shock results on Matchday 29 but surely Hamburg can’t do it again? Here’s all you need to know.

— It has been a long time coming (again), but Bayern Munich finally secured the Bundesliga title on Matchday 29. Four goals, celebrations with the away fans and a glass of champagne for Jupp Heynckes in the changing rooms – but nothing more. For many of the Bayern squad, this wasn’t the first title – it was Franck Ribery’s eighth Bundesliga crown – but even for those who were dancing in Bayern colors for the first time, there was a sense of a beginning rather than an end. The last time Heynckes won the Bundesliga with Bayern it was 2013 and we all know how that ended. What are the chances of the same occurring five years later?

— The Bundesliga relegation battle is perhaps the story of the season. Desperately needing a win, Cologne could only draw with fellow strugglers Mainz, while Wolfsburg beat Freiburg to drag Christian Streich’s team into the fight. But Hamburg beat Schalke in a shock result that dropped Cologne to last and left the northern club five points off the playoff spot with five games to go. Surely HSV haven’t got another great escape in them, have they?

— Borussia Dortmund haven’t played well in recent weeks, with the 6-0 hammering in Munich last week the peak of their disappointment. However, a fluke goal from Christian Pulisic lit the yellow touchpaper against Stuttgart as the attack sparked into life. Three goals was nearly four by the final whistle, but the result and the performance leaves even Bundesliga neutrals excited about next weekend. BVB are now just one point behind second-placed Schalke and next week in Gelsenkirchen it will be Ruhr derby time again.

— Bayern Munich’s title is their sixth in a row, their 27th Bundesliga title and their 28th German title (won a league championship in 1931-1932). It is also Jupp Heynckes’ fourth league title win as Bayern Munich head coach, making him the third most successful Bundesliga coach in the club’s history.

— Tayfun Korkut’s eight game unbeaten run as Stuttgart head coach came to an abrupt end in Dortmund. Still, thanks to Korkut Stuttgart are dreaming of Europe rather than worrying about Bundesliga survival.

— Christian Pulisic’s goal from a cross was his first from outside the box in the Bundesliga. It was also his fourth in the league this season, already more than last term.

“I’d like to send greetings to Italy and Carlo Ancelotti, who from my perspective also played a part in this title win. He’s a gentleman and a top coach.” Bayern Munich head coach Jupp Heynckes on his predecessor.

“We can’t sign anyone, we can’t throw players out or build up a player over three weeks. Now, we need every single person and that’s my plea to everyone who means well for Borussia Dortmund.” Nuri Sahin with some stern words after BVB’s 3-0 win against Stuttgart.

“Just like they are when you get promoted into the ninth division, but perhaps a little more subdued.” Bayern Munich’s Thomas Müller on celebrations after the club won their sixth straight Bundesliga title.

“My evening looks as follows: I’ll enjoy watching some golf and then I’ll have a nice Saturday and Sunday.” Hannover’s sporting director Horst Heldt after the club’s Friday night win against Werder Bremen.

The coaching merry-go-round rumors continued on the weekend, with Bayern Munich and Borussia Dortmund in search of a new head coach for next season. RB Leipzig CEO Oliver Mintzlaff wasn’t happy with all the talk about Ralph Hasenhüttl though, telling Sport1 that no one had asked them [about Hasenhüttl’s future] and if they did it would be “a short phone call.”

Bayern Munich’s latest Bundesliga party was nearly put on hold when Augsburg took the lead on Matchday 29 thanks to a freak own goal. Jerome Boateng’s slip let the visitors in, but Sven Ulreich’s save went straight off Niklas Süle’s face and into the goal. The defender knew nothing about it, but it seems there’s nothing Bayern haven’t done on their way to the title this season – freak own goals included.