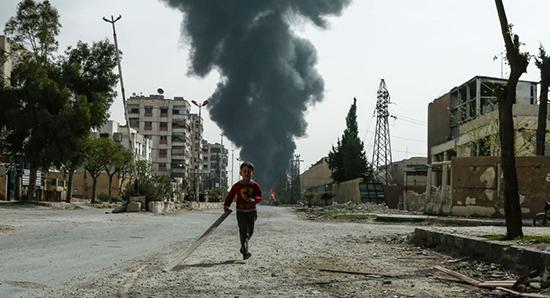 When Sputnik last spoke to Robert, a recent repeat viewing of the documentary had yielded two new alarming revelations — the apparent embedment of the BBC crew with jihadi group Ahrar al-Sham (accused of being involved in and leading numerous atrocities over the course of the Syrian crisis), and the Panorama team passing unmolested through a Daesh checkpoint.

Now, a further eagle-eyed review of the Panorama special has exposed how BBC Panorama journalists crossed paths with the controversial White Helmets. Robert believes their presence not only raises yet further questions about the documentary’s veracity, but also the true nature of the renowned ‘humanitarian’ group.

At the time the documentary was filmed — late August 2013 — the White Helmets were in their infancy, as yet largely unknown in the West, having been founded a mere five months earlier in Turkey by James Le Mesurier, British private security specialist and former military intelligence officer.

Accordingly, neither the group nor its operatives are named in Saving Syria’s Children — but despite their anonymity, they feature prominently in the documentary’s centerpiece — the apparent aftermath of an attack on a school playground in Aleppo, in which a Syrian army fighter jet is claimed to have  deployed an incendiary bomb containing a “napalm-type” substance.

Robert connected the dots when he spotted a Volvo fire engine marked in English with no license plate in a scene filmed at Urm al-Kubra, Aleppo on August 26. He’d seen the vehicle before — in footage shot almost three years later, following an alleged air strike on a White Helmets center in Atareb.

It appears first parked outside a residential apartment building, which the BBC claims the Syrian jet struck prior to the playground. It is subsequently seen departing west towards Atareb hospital, where victims of the alleged attack are receiving medical care from UK charity Hand in Hand for Syria.

Robert then carefully studied the footage shot at Atareb, and identified a number of White Helmets operatives.

For some, the presence of the White Helmets at the hospital might not be that notable — after all, it entirely befits their mainstream depiction as a band of humanitarian volunteer rescue workers, working to rescue civilians injured in bombing raids.

However, journalists and researchers who’ve travelled to Syria and interviewed local residents have formed an entirely different perception of the group. For instance, Vanessa Beeley previously suggested to Sputnik the White Helmets are a “propaganda construct,” supporting the “neo-colonialist” ambitions of Western powers and violent extremist groups operating in Syria. Moreover, she has collected documentation indicating the group plays an active, often armed role in the terrorist war on the government of Bashar al-Assad.

“The White Helmets have been crucial to anti-Assad propaganda efforts, offering first-hand‘proof’ of chemical weapons attacks and other alleged atrocities carried out by government forces, which are then used to make the case for intervention. These attacks are often proven to have been staged — or the work of opposition forces — later down the line. Another interesting feature of their videos is they never document actual strikes, just the aftermath, and there are always a vast number of cameras on-site,” Vanessa told Sputnik in March 2018.

In this context, the White Helmets’ unacknowledged presence at the hospital takes on a far more sinister character — and Robert believes it significant two White Helmets featured in Saving Syria’s Children, Ali Obied Abo Alkasem and Mounir Mustafa, have both been photographed posing with weapons, and have frequently shared incendiary anti-Assad posts on social media.

In that sense, the White Helmets were in good company with Hand in Hand for Syria. Robert’s investigations into the charity have uncovered social media accounts linked to its workers and founders similarly rife with bloodthirsty images and photographs, including shots of staff tending to child soldiers and a shocking array of armaments.

“Far from the random assemblage of locals and officials one might expect to attend such an incident, many of those captured on film in Urm al-Kubra and at Atareb Hospital effectively constitute a ‘Who’s Who’ of UK and Western backed anti-Assad forces,” Robert told Sputnik.

That conclusion would certainly explain why the exact chronology of the attack has never been conclusively pinpointed. According to the BBC, it took place August 26 2013, although accounts of its timing span a range of six hours. Human Rights Watch states it occurred “around midday,” the Violations Documentation Center places it at two in the afternoon, documentary lead Ian Pannell has stated it occurred “at around 5.30pm,” while cameraman Darren Conway places it between three and five. Alleged eyewitness Abu Yousef suggests it was closer to six.

Moreover, it would validate the suspicions of many viewers that the victims of the attack featured in the documentary are merely acting. In one scene, males young and old are shown being treated for chemical burns, writhing, drooling and groaning in great distress. A GMC-registered practicing doctor, who’d worked with burns victims firsthand, told Robert he believes the scene to be “an act.”

“[They] were able to sit down, be touched by others, even talk. This is not how severe burn victims would present. Most would be screaming the place down in agony even after treatment and all sorts of pain drugs, but they’re able to speak and breathe very well. Some are shown with skin hanging off but the flesh beneath actually looks like more skin. Also, if the poison was dropped from a plane, their hair would’ve been lost and patches would be evident — many still have full heads,” the doctor said.

Whatever the truth of the matter, Robert is resolute — Saving Syria’s Children was produced and broadcast to bolster public opinion in favor of military action against the Assad government. The timing of its broadcast couldn’t have been more opportune for the UK government — some scenes (including the questionable ‘chemical burn’ sequence) were shown the evening of August 29 2013, just as the UK parliament was quite literally voting on possible military intervention in Syria, on BBC News at Ten.

Fast forward to April 7 2018, and the White Helmets are again fundamental to claims of Syrian government forces carrying out a chemical weapons attack — this time in ‘rebel’-held Douma. Around 70 are said to have died due to exposure to chlorine and sarin gas. Despite hostile reactions from many Western governments, and talk of potential military action, observers on the ground are unconvinced that such an attack ever occurred — or if it did, that it was the work of government forces. Among them is Vanessa Beeley.

“If we were to map the chemical weapon claims in each terrorist held area undergoing liberation by the Syrian Arab Army, we would clearly see the claims are commensurate with pressure felt by extremist factions, as the Syrian Arab Army closes in on their strongholds. In other words, as the SAA nears victory, we are expected to believe they use chemical weapons against civilians in a densely packed urban area as their enemies withdraw into a shrinking combat zone, taking civilians with them as human shields and hostages,” Vanessa told Sputnik.

In essence, she concludes claims of chemical weapon attacks are a “propaganda tactic” employed by terrorist factions to play for time, secure a ceasefire and cultivate calls for a ‘No Fly Zone’ in Syria — the precursor to “humanitarian” intervention from the international regime-change alliance. After all, Vanessa reasons, a ceasefire allows militants to organize themselves and rearm — and chemical weapon attacks by extremists against the civilian population in West Aleppo were never given equivalent importance by the same “humanitarian” nations.

Underlining this, one day prior to the alleged attack in Douma, Vanessa visited the liberated sectors of Eastern Ghouta with the Syrian Arab Army. In the district of Erbin, she found a bomb making factory and a chemical weapons facility, previously occupied by extremist factions.

On top of incendiary material, Vanessa happened upon documents offering instructions in the manufacture of napalm hand grenades, among other improvised explosive devices, and how to make grenades more deadly by adding nails and White Phosphorous.