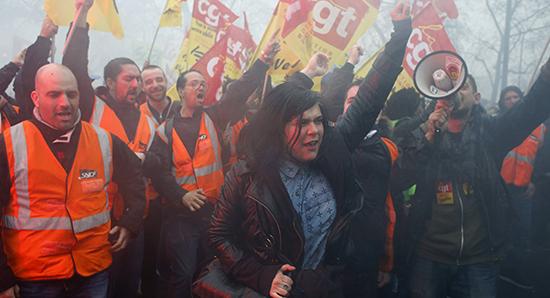 Alex Gordon, former president of the UK’s National Union of Rail, Maritime & Transport Workers, told Radio Sputnik’s Loud & Clear that the series of strikes is indicative of French railway workers’ “particular place in the culture and the ethos in the country” due to their role in rebuilding France after the nation’s liberation from German occupying forces in 1944.

​Under Macron’s reform plan, new railway hires would not be given jobs for life and early retirement guarantees that are currently provided to rail employees. In addition, the SNCF, France’s national state-owned railway company, would be converted into a private company whose shares are owned by the country.

“The confrontation that we are seeing in France is interesting,” Gordon told hosts John Kiriakou and Brian Becker.

“President Macron’s strategic response is to be the French Ronald Reagan or the French Margaret Thatcher and take into France the mantle of the conqueror over organized labor. That’s what these disputes are really about,” he noted.

“The genesis of this is that France’s railway sector is a very important part of its economy. If you look at a map of continental Europe, you can see that you can’t travel from Eastern Europe to Spain and Portugal without going through France. You need land access to be able to travel through France to have a European market. Macron is facing pressure from the European Commission to open up the French economy to competition,” Gordon explained.

“However, French society has been built around a social model that has given specific protections to citizens and groups of workers. So the railway workers in French political terms are still regarded as being the inheritors of the tradition of the liberation of France from Nazi occupation.”

“In any French city, you will see photos of railway workers who were shot by the German occupying armies for resisting the occupation of their country. In 1944, when France was liberated from the Nazi occupation, the railway workers were deemed to be national heroes because of their role in the French resistance but also because of their economic role in rebuilding the country in the following decades,” Gordon said.

“The workers in France have a particular place in the culture and the ethos of the country. They were given particular rights like special pensions and early retirement, that do not apply to workers in other sectors. So when a president of the French Republic comes forward to challenge these rights, there are real political consequences in the French culture. French workers see railway workers as being at the cutting edge of the organized working class and when they’re attacked, other workers will come to their aid,” Gordon told Radio Sputnik.

On Monday, SNCF’s chief executive, Guillaume Pepy, announced on the French BFM television news channel that the rolling strikes have cost the company around $123 million so far. Workers have pledged to strike on two out of every five working days through June.

“First of all, we are defending our status and that’s a real thing, and secondly, we are defending our public services in France,” striking rail worker Kamel Aroup said Monday. That day, several hundred union activists protested in Paris while legislators in the National Assembly began discussing the reforms outlined by Macron.

“The dispute in France has been triggered by European Union legislation stating that by the end of this year, every European Union member state will have to contract out their railway services to private companies through competitive rendering,” Gordon told Radio Sputnik.

“This is a total break of the model of railway ownership and operations that exist at the moment in France. This confrontation is about how the French see their railways as for the people instead of as a railway for big business. Railway workers know that conditions are going to be in a remorseless period of decline if these legislative changes are allowed to come in,” Gordon said.